It would seem, despite what President Obama told us, that elections really don't have consequences -- at least when it comes to Democrats. When the electorate pitched out the progressive kooks in Madison, it was trying to bring some semblance of fiscal sanity to the state.

But apparently Democracy is an excuse for riots, death threats, incivility and -- now -- intentional destruction of private businesses.

M & I Bank of Wisconsin has committed an unpardonable offense. This bank took bailout funds and thanks to the magic of Citizens United our own tax dollars flowed through their executives hands into the coffers of Scott Walker's gubernatorial campaign. We haven't dug deeply yet, but I think when we do we're going to find that we no longer have Russ Feingold's voice in the Senate because of this as well.

The mainstream media isn't covering it, but I'd like to show you a few images of what poetic justice looks like ... ...What these pictures show are six hundred ordinary citizens descending on the M&I branch near the Wisconsin Capitol after learning of their purchase of the gubernatorial election last November. Two firefighters with old school ideas about saving had over $600,000 between the two of them and they demanded cashier's checks on the spot. 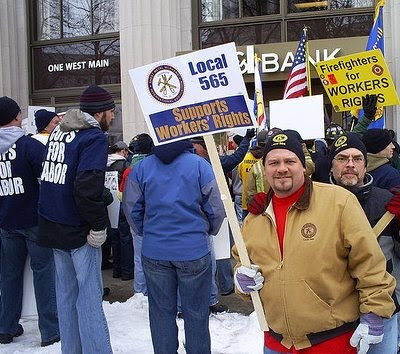 Not everyone has the purchase price of a couple of homes sitting in the bank, but if the 60% of Wisconsin that's sick to death of Scott Walker's behavior simply go close their accounts the bank will crash and they'll have stripped him of the funds he needs to fight the recall next January.

A couple of people have the documentation and my money is on @Karoli over at Crooks & Liars getting the job done first. I'll come back and post the first good piece I see. I'm trying to get this out and keep it tidy - look in one of the comments and I'll provide some of the links the researchers sent me, so those inclined to do their own digging can get started.

You know what really chaps my ass here? All week we've been seeing Tea Party trolls saying "It's not fair that public employees take our tax dollars and use them in elections."

On behalf of all of us who work for a living, unlike those fools with their misspelled signs being bussed around by Koch Brothers I'd like to say ...

As an aside, we need to elect a lot more Tea Party Republicans like those in Madison.

these govt unions suck at the teat of government and think that the government has an unlimited amount of money - especially if it would just tax the rich enough!

but the fact is that the govt gets its money from the workers in the private sector and these workers are sick and tired of underwriting the givt unions' deals.

ergo: the govt unions attacks on the rich and the banks will not work; it will not ignite the class war that they and obama want to igoite.

it will boomerang and they will end up helping us elect more conservatives.

I did sleep in a Holiday Inn Express, but still couldn't find any federal statutes that organizing a bank run is a criminal act.

How many conservatives would it take boycotting everything Disney and GE to wipe ABC and NBC off the map?

How many financial sector companies would be destroyed if conservatives pulled every dime out of companies that are funding the Obot 2012 campaign?

The small problem the kossacks seem to have forgotten is that the vast majority of liberals have no significant amount of money in any bank, so the damage they can do is negligible compared to what would happen if conservatives started a run on banks whose employees have donated to leftist candidates.

Curious: two people with the ability to stuff away $600,000 in savings are complaining about their ability to negotiate better earnings?