Anyone have a mathematical formula handy? I would like to calculate the number of Obama voters who have defected -- and will defect -- as each enormous Democrat boondoggle fails. You know: "Stimulus" programs, HAMP, HEMP, Cash-for-Clunkers, Obamacare, "Financial Reform", 10% unemployment, 20% underemployment, the government takeovers of GM and Chrysler, "Quantitative Easing", a new war, and $5.2 trillion in new Obama debt.

Or maybe we can just use Jimmy Carter's old 'Misery Index'?

While everyone knows that the CPI in the US is manipulated beyond repair (a topic far too broad to be discussed here suffice to say that as disclosed previously true inflation in the US is currently runrating at over 8%), inflation as actually represented by US consumers... is near all time highs... So if one takes this data series and adds to it the narrow unemployment definition (U3) one would get an adjusted Misery Index for US citizens (using inflation expectations instead of manipulated CPI).

...As the chart below shows, the Misery Index, which is merely inflation plus unemployment, constructed as such, would now be at an all time high. 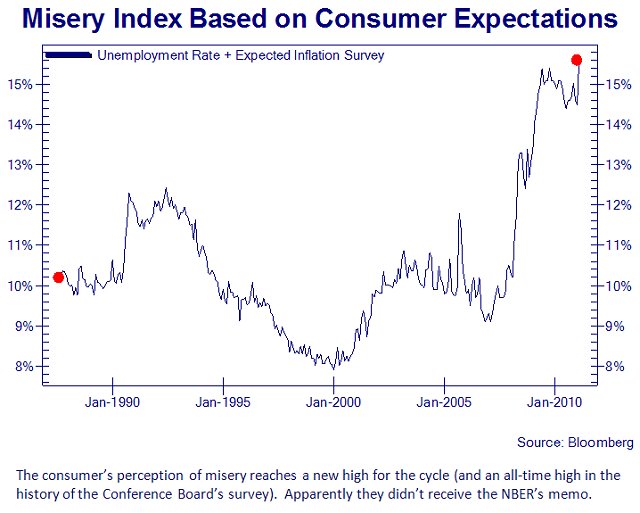 ...[This is hardly] in keeping with Bernanke's wealth effect prerogative, but surely in line with record food stamp usage reported month after month... And the other good news is that we have the Brits beat again: whereas the US is at a record, the UK is merely at a 20 year high, proving once again that only the US never does anything half-assed.

That's right, Tyler. Our beloved administration is, without a doubt, full-assed.