Ya think? Rep. John Campbell: We Are a Ponzi Nation

Tyler Durden alerts us to at least one Congressman who really groks the gravity of American's tenuous financial position.

Zero Hedge first observed the duration mismatch in US Treasury holdings back in November 2009, when we highlighted the concerning amount of debt that the government has to roll every year courtesy of about 30-40% in outstanding paper that is of very short duration (under 2 years or so). We have also been pretty adamant that by now the US economic system is nothing but a ponzi scheme pure and simple. Today, we observe how this epiphany manifests itself when it occurs to a congressman, in this case John Campbell (California). The punchline: "I understand that the Fed and the Treasury are trying to keep interest rates low and improve the economy and the deficit. But, when coupled with the huge deficits, these moves look a bit like a Ponzi scheme that will soon unravel." Amen brother. 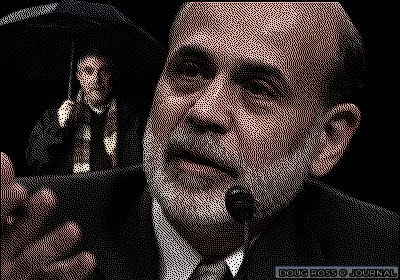 I learned something last week. I learned that fully 40% of the over $9 trillion in Treasury debt currently outstanding to the public has a maturity of 3 years or less. Put another way, it means that we are rapidly approaching $4 trillion in U.S. debt that matures by 2014 or sooner. As I write this, the yield (interest rate paid) on a 2-year Treasury note is 0.645% or about 2/3 of one percent. The yield, at the same time, on a 10 year Treasury note is 3.4%, and on a 30 year is 4.55%. In bond parlance, this is called a "steep yield curve" where interest rates get much higher as you go farther out in time.

It's pretty clear why the Treasury is doing this. By issuing mostly short-term notes, the Treasury is paying less interest, thereby keeping interest costs and, consequently, the deficit down. In addition, the Federal Reserve is in the middle of its "quantitative easing #2" (QE2) under which it is buying $600 billion of our own Treasury debt over about a 6 month period. The Fed is not buying the short-term notes, but is buying 10 year maturities and longer in order to hold those rates down. And, since the Fed is earning the interest thereon (paid by the U.S. Treasury), it is improving its yield. We are currently running a deficit of about $130 billion per month, so the Fed is basically buying all of the new bond issuance from the deficit for almost 5 months.

What does this all mean? I understand that the Fed and the Treasury are trying to keep interest rates low and improve the economy and the deficit. But, when coupled with the huge deficits, these moves look a bit like a Ponzi scheme that will soon unravel.

We are printing money ($600 billion) to buy our own debt so that the full effects of the deficit are not felt. We are buying long-term bonds to artificially hold down the rates on those bonds since home mortgages and many other things are based on those rates. We are selling the short-term bonds at cheaper rates to hold down costs now, but are leaving ourselves open to huge cost increases when interest rates go up. And, we are at historic lows on these short-term bond rates. If they were to rise by 3 points (which would put them where they were at as recently as 2008), our deficit would increase by another $150 billion per year, even if the long-term rates stay the same. And, once the Fed ends QE2, even if it doesn't reverse it, the markets will then have to absorb a new influx of long-term bonds at a time when our ability to pay them is in question. The Fed can cure a bunch of this simply by printing a lot more money. That, however, will result in an inflationary period with major wealth destruction and economic malaise.

I have only two words for you.


Update: As Treasury Cash Drops To Just $14.2 Billion, And No Bond Auctions Until Next Week, Is America About To Run Out Of Cash?

John Campbell thankfully, is now empowered to get a handle on the Democratic Partisan mess.

However, have you seen this mess heading our way?

A socialist-communist given absurd power to wreak more Democratic Partisan havoc on US Banking, Business, Industry, etc., is trying a "charm" offensive - (much like the Hillary CON of the past):
"Banking's Scourge on Charm Offensive "

Remember that disastrous Dodd-Frank Bill which ignored Fanny-Freddie and gave absurd powers to a new KING to oversea the USA's economy?

She is coming to a theater near all now.

A fiscal tsunami is coming: when is Congress going to act?
.
As I was watching the latest news at 4 a.m. this morning, I watched video after video of the quake, the tsunami and the aftermath.

The thought occurred to me that this could be construed as a warning. It's easy to view all this thru the lense of our finances as a nation.

We could be seeing what amounts to our metaphorical future... except, it's a future I believe we can avoid... if we're willing to pay the price.

As a country, we are rapidly spiraling down to destitution. Government spending and the printing of worthless paper is making our money the laughing stock. Our $14 trillion dollar debt exceeds our economic output.

What happens to a family when that happens, with no end in sight?

In 1986, when I left Germany for the last time (having completed my second tour in the Army), the exchange rate was around 4 marks, 20 pfenning for one dollar.

What is it today?

According to the currency converter in the left column of this blog, it's 1 mark 40.

And it's hard to believe that rate is going to be getting any higher for the dollar any time soon.

We are spending ourselves into oblivion. And at some point, that either has to stop, or that will be the goal we achieve.

The question continues to remain: will those leading our government have the courage to do what must be done?

That's a rhetorical question, of course: Ridgefield Barbie has no courage of any kind, so we can't count on her to lead.

Our US Senators are aiding and abetting what seems to be our obvious destruction.

As it is, that ship truly is the Titanic and we are closing on the icebergs.

If we hit that ice, there will be no saving us. And the problem is that the closer we get to that ice, the more radical the turn to save us from gutting ourselves on that frozen water.

But we do know.

We will have the fiscal equivalent of Sendai.

The only thing we've got going for us right now is that almost everyone else is even worse off.

But we are rapidly climbing the latter of stupidity only to fall off the top. And then what?

Government is already lying to us at almost every level, sticking us on stupid.

In sober moments, everyone involved knows we have to do SOMETHING... and it must be done now.

In 2011, we can't even get our allegedly Republican county government to require county employees to pay a part of their health care premums.

How is it that in this day and age, the people of America cannot see that our future is very much like the tsunami-laden future of Japan... only our destruction... our drowning... will be financial?

Why is it we don't seem to care?