The heated rhetoric and aggressive attitude of some Democratic lawmakers in Wisconsin has surprised many, even revolutionaries, says a leader of the Communist Party USA.

Rep. Peter Barca (D-Kenosha): "We will carry on this battle to the streets of Wisconsin... every turn they take, all of your faces will appear... and we will not quit fighting until this is reversed, this assault on the working people of Wisconsin!"

Even the Communist Party is surprised by the violent rhetoric coming from Democrats...

Scott Marshall, CPUSA Vice Chair: "there is a radicalization going on among Democratic legislators that I've never seen in my lifetime..."

The Communist Party was actively involved in the Madison protests... in fact, one of the most recognizable symbols used in the protests was also used by International Socialist Tendency, Austria's Community Party, and Malaysia's Socialist Party.

It can also be found on the office doors of some Democrat lawmakers, like Senator Chris Larson. 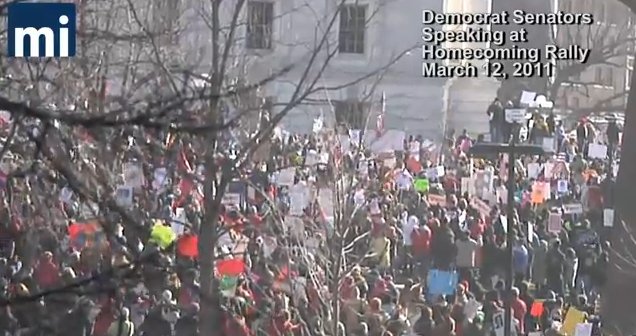 That kind of rhetoric has led the Communist Party to consider collaborating [more openly] with Democrat Party lawmakers.

Consider the import of these statements.

The Democrat Party is so poisoned, so laced with the traitorous and defective ideology of Marxism, that it must be flushed into the toilet bowl of history. In 2012, you must vote -- and you must make sure your family, friends and colleagues vote: every Democrat must go. That, combined with the rejection of RINO candidates in GOP primaries, will -- God willing -- allow us to expand the beachhead we established in 2010. Our mission is simple to explain: to reestablish our Constitutional Republic.


"The fact that we are here today to debate raising America’s debt limit is a sign of leadership failure. It is a sign that the U.S. Government can’t pay its own bills. It is a sign that we now depend on ongoing financial assistance from foreign countries to finance our Government’s reckless fiscal policies. … Increasing America’s debt weakens us domestically and internationally. Leadership means that ‘the buck stops here. Instead, Washington is shifting the burden of bad choices today onto the backs of our children and grandchildren. America has a debt problem and a failure of leadership. Americans deserve better".

The standard Democrat reply would be:

With Democrats, anything they say won't be used against them

You folks are real idiotic kooks.