Obama: American oil production reached its highest level since 2003 if you count oil rigs that aren't producing anything

I say that because even Bill Clinton is blasting the President's ludicrous anti-drilling positions and, by implication, the stunning series of lies he recited in yesterday's 'press conference'. 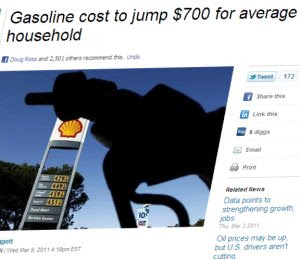 ...Clinton said there are “ridiculous delays in permitting when our economy doesn’t need it,” according to Noe and others... “That was the most surprising thing they said,” Noe said.

[Clinton and Bush 43] both generally agreed on the need to get offshore drilling workers back on the job... [they] also agreed on the need for more domestic shale gas production, with Clinton noting that it has been done safely for years in his home state of Arkansas.

And, when queried about his anti-hydrocarbon policies during a so-called "press conference", Obama resorted to a series of bald-faced lies. 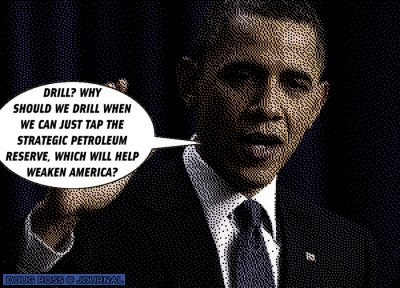 President Barack Obama said Friday that oil production out of the Gulf of Mexico is at a record high and that a rush to new drilling is not a long-term solution for a nation that consumes more than a quarter of the world's oil...

...With gas prices rising amid increased international demand and chaos in oil-rich Libya, Obama sought to debunk the notion that his administration was impeding domestic energy production.

"Last year, American oil production reached its highest level since 2003," said the president. "Oil production from federal waters in the Gulf of Mexico reached an all-time high. For the first time in more than a decade, imports accounted for less than half of what we consumed. So any notion that my administration has shut down oil production might make for a good political sound bite, but it doesn't match up with reality."

"We are encouraging offshore exploration and production," said the president. "We're just doing it responsibly. I don't think anybody has forgotten that we're only a few months removed from the worst oil spill in our history."

Obama's fables were so outrageous that even the industry journal Energy Tomorrow called him on it. 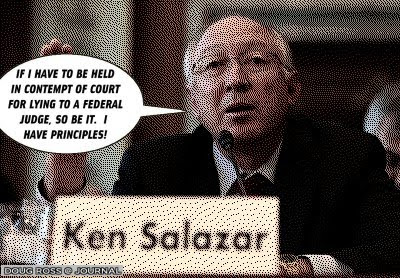 But Salazar's numbers distort the true number of working rigs in the Gulf of Mexico. According to Baker Hughes:

In the same hearing, the Secretary also claimed that "the production has remained at an all-time high" within the Gulf of Mexico and there is no way to actually make this true. The Energy Department's Energy Information Administration reports that production in the Gulf of Mexico is in decline... EIA Petroleum Engineer Gary Long told trade publication E&E News that the rig count in the Gulf was cut in half after the Deepwater Horizon accident and that it wouldn't rebound to previous levels until the end of 2011 under the assumption that the permitting process is restored to historical rates. Further, since there is a lag time from the time an exploration permit is approved to the time of actual production, and since no only a handful of permits for new wells have been granted since April of 2010, it is likely that Gulf of Mexico production will continue to be hit hard in 2012 and beyond.

This President's policies and his statements are both disgraceful. And he may have hit another new low with his outrageous con-job of a press conference, which was designed solely to distract while he continues his intentional destruction of the American economy.

If drilling for oil has a ten year spinup to see results and we are now seeing increases then shouldn't we be thanking President Bush for those increases?

"The President's policies and statements are disgraceful." I'll go ahead and complete your statement. The President and his entire administration are disgraceful. Not just on their energy policies,but also job policies, tax policies, border policies, defense and security policies, and on and on and on. They are a complete and total disgrace and if we could pretend for a minute that they weren't destroying every sector of this once great country intentionally, the best we could say of them would be that they are unbelievably, exceptionally, and dangerously unqualified for their positions. Warren Buffett has stated similar opinions on Obama's policies, but then always finishes by saying he voted for Obama and he is the right man for the job. To liberals results don't count, it's just their wonderful intentions.

That's just like "Al Gore won the Florida election in 2000.....if you count all the illegal votes, and throw out all the military votes....he clearly won."

Amazing the contortionist mental gymnastics these folks are capable of.
--Taqiyyotomist