We Now Join the Nuclear (and Economic) Meltdown Already in Progress

Chris Martenson is a scientist and financial analyst by trade who used his unique combination of skills to predict the 2008 economic meltdown. His latest message is a bit more chilling than usual -- and certainly worth a moment's consideration.

...For decades, the world has been running its own nuclear-style reaction, only in the currency and debt markets, where exponentially-accelerating piles of debt and money have spun about faster and faster in a gigantic, complex, coordinated reaction, the core of which is, and always has been, the United States.

At the very center of this ungainly money reactor is the main fuel pile itself, the US Treasury market. With any interruption to smooth flow of money through this pile, it will immediately become unstable. 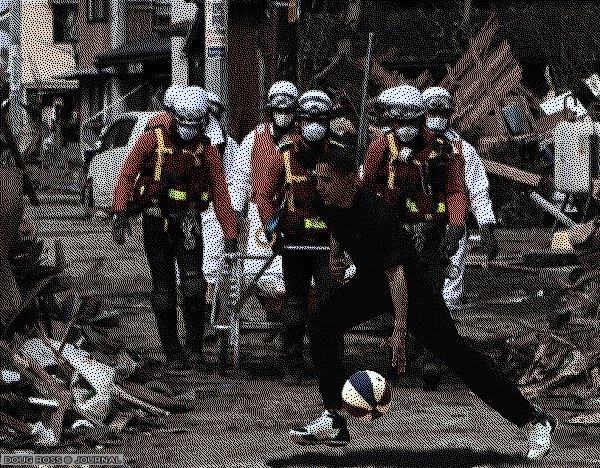 Stage 1: The world watches, riveted, as Japan suffers a tragic and horrible earthquake and tsunami, but as horrifying as these are, they are localized phenomenon affecting a relatively small percentage of the country. The real trouble lurks within damaged nuclear plants, which are now ruined and will never again produce electricity for Japan, creating instant shortages that will take years to remedy. Worse, a dangerous plume of radioactivity is carried south by winds. Tokyo partially empties and shuts down for all practical purposes.

Stage 2: The abrupt slow down of the world's third largest economy alters the smooth flow of cash around the globe, and even causes reversals of some other long-standing flows. Chaotic eddies emerge in a decades-old pattern of ever-increasing flows of money into and out of the money centers, and various carry-trade and other interest-rate-sensitive strategies blow up. Manufacturing in Japan screeches to a halt, disrupting just-in-time manufacturing strategies both internally and across the globe.

Stage 3: In order to fund the rebuilding effort, Japan has to buy a lot of items from foreign suppliers at the same time that its exports plunge precipitously. At first Japan simply does not participate in US Treasury auctions, leading to a shortage of buyers. But eventually Japan has to sell some of its vast hoard of US bonds in order to pay for external items needed for its reconstruction. Further, insurance companies, huge holders of US bonds, face stiff liability claims in the wake of the worst natural disaster to hit a heavily industrialized center and are forced to redeem enormous amounts of Treasury paper. US Treasury yields begin to climb.

Stage 4: Continuing unrest in the MENA region serves to keep oil elevated and local funding needs high, while Europe's weaker players (the PIIGS) continue to slip under the waves. Money continues to ebb away from the US Treasury market. Forced by circumstance, the Federal Reserve reverses its linguistic course and opens the monetary floodgates once again. There's nothing like a crisis to justify more money printing, especially to a one-trick pony (the Fed) that only knows how to stamp its hoof on the 'print' button.

Stage 5: An increasingly chaotic monetary and fiscal situation spills over into the derivatives arena, creating a number of financial accidents. Stressed governments find themselves in more of an arguing mood than a pull-together-and-sing-Kumbaya mood, and agreements are hard to come by. Banks begin to fail again, global trade falls off, unrest continues to build, and then it happens - a currency crisis.

Stage 6: Everything changes. Faster than you think.

...Okay, folks, this is not a drill... Events have now sped up to the point that we cannot predict what will happen next. At this point a systemic banking crisis, complete political upheaval in one or more countries, a currency crisis, or a debt crisis are all within the realm of the possible.

This is the most difficult Alert I've ever had to write, because I know I have not yet processed all the necessary information to truly assess the risks. I am operating on gut instinct here, and several of you have already reminded me to trust myself. Thank you. That's what I am doing now.

...As always, I have no idea if anything is going to transpire or not, or when. How's that for indecisive? But I can tell you that the pressures are larger than they’ve ever been throughout this long emergency and that conditions are ripe for an avalanche. My sincerest hope is that this will all blow over. But hope alone is a terrible strategy, and so we prepare.

Martenson has a plethora (yes, I said it!) of free information available on his website, including a crash course on the economic crisis and a What Should I Do? guide.