Sen. Charles Schumer, D-N.Y. [joined] a conference call with reporters Tuesday morning without realizing the reporters were already listening in. Schumer thought he was on a private line with four Democratic senators who were to talk with reporters about the current budget stalemate. 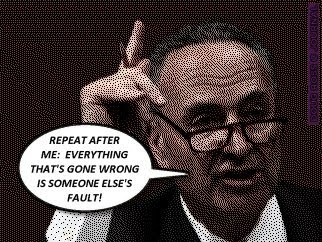 Schumer instructed the group, made up of Sens. Barbara Boxer of California, Tom Carper of Delaware, Ben Cardin of Maryland and Richard Blumenthal of Connecticut, to tell reporters that the GOP is refusing to negotiate... He told the group to make sure they label the GOP spending cuts as "extreme."

"I always use extreme, Schumer said. "That is what the caucus instructed me to use."

..."The main thrust is basically that we want to negotiate and we want to come up with a compromise but the Tea Party is pulling Boehner too far over to the right and so far over that there is no more fruitful negotiations," Schumer said on the call. "The only way we can avoid a shutdown is for Boehner to come up with a reasonable compromise and not just listen to what the Tea Party wants. "

...Someone must have finally told Schumer that the media were listening and he stopped talking midsentence.

As Ace observes, a government shutdown may be a fait accompli:

The key point is less about the message coordination and more about Schumer scheming to shut the government down, and preparing a rehearsed justification for it, claiming it's the other guys who won't negotiate.

Seems to me he's already well beyond negotiating and already digging bunkers.

Let 'em dig. Shut the damn government down already. If we can't marshal the will to enact massive cuts, the whole damn thing is going to collapse soon anyhow.

Agree 100%, Doug. If that's what it takes, bring the whole goddamn rotten house down. We're only putting off the inevitable anyway. Let it happen on Obama's watch. What could be more apropos?