Authorities "do not yet have a motive" of suspect who tried to break into American Airlines cockpit while shouting "Allahu Akbar!"

I, for one, suspect that Militant Quakers are behind this, the third major airline disturbance in 24 hours. 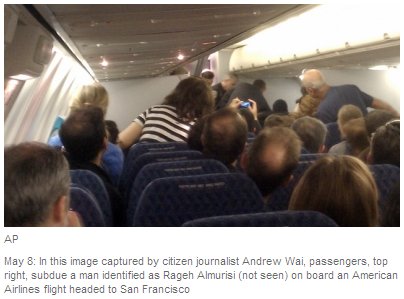 The passengers sat stunned as they watched a man walk quickly toward the front of American Airlines Flight 1561 as it was descending toward San Francisco. He was screaming and then began pounding on the cockpit door...

Within moments Sunday, a flight attendant tackled Rageh Almurisi. Authorities do not yet have a motive.

While authorities said that Almurisi, 28, of Vallejo, Calif., has no clear or known ties to terrorism, the incident underscored fears that extremists may try to mount attacks to retaliate for the death of al-Qaida leader Osama bin Laden last week.

Federal agents are investigating Almurisi's background. He was carrying a Yemeni passport and a California identification card, authorities said...

...passengers on the plane were stunned when they saw Almurisi walking down the aisle. She said a woman in a row across from her who speaks Arabic translated that Almurisi said "God is Great!" in Arabic... Andrew Wai, another passenger, told KGO-TV on Monday that the wife of one of the men who took Almurisi down later said Almurisi was yelling "Allahu Akbar."

"There was no question in everybody's mind that he was going to do something," Marty said...

Worry not, dear citizens. We have crack investigative minds like Eric Holder and Janet Napolitano on the case; they will certainly be able to deduce the true motive of Mr. Almurisi given enough taxpayer dough, time, resources and race-baiting.

Great... just what I needed 2 weeks before flying home: an uptick in incidents like this.

Which, based on the photo, looks like it prompted everyone to lean slightly towards the aisle and take photos.