O.G. relays this photo of what is presumed to be UBL's carcass before it was dispatched to the deep. 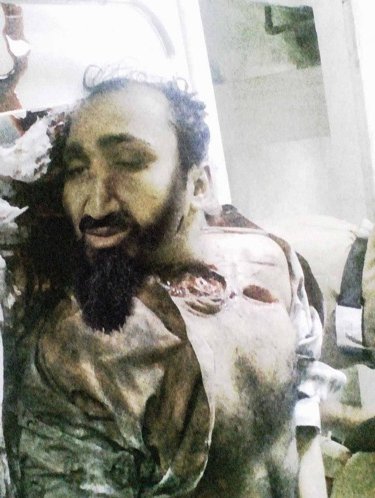 I can't verify its authenticity but, then again, I can't not verify its authenticity either. The most recent Drudge flash casts doubt, stating: "The images, being described as 'graphic', are bound to stir emotions in the east and the west, and will likely become the most viewed photographs in modern history... One image shows a bullet wound to his head above his left eye. "

Update: O.G. observes that this photo matches the description "if it's flipped, dumbass."

Rotate to the horizontal.

I don't know if this is real. From what I heard, the bullet over the left eye "blew part of his brain away." It looks pretty intact to me. In addition, this picture isn't all that disturbing.

I'm not buying that one either.

There is an entry wound below the mandible on the left, presume exit at the right squamosal suture.

There is also an entry wound below left clavicle, exit through right.

Flipped? There's a buttonhole on his left collar, where it ought to be, unless Moslem garment makers custom-made his fatigue jacket backwards, like the koran.

Thanks for this link, iOTW.

TOTAL FAKE! FAIL! Look around the edge of the beard, it is curiously lighter that the rest of the photo. This was a good try, however even an untrained eye can see that this is a fake.

Haha, not as fake as the first one, but this photo... look at the "glow" around the beard, and this isn't too shocking compared to some things our own government has released, but still, the beard is fake, so this whole photo must be fake.

First off, it looks like Danny Devito. Second there's a Halo Outer Glow effect around the Beard. Third, You can see the Beard has been laid over the top of the Base image. Very Bad Photoshop Job.

Nice. Well, except that it's a photo of a young bin laden and he was old, wrinkled, and gray as early as 2004. Since the Muslim religion forbids a blade to touch their skin even to shave, I seriously doubt he got a facelift. Since it also forbids vanities, I doubt he was using just for men.

Face it. The U.S. Did this to us so they could easily take our rights and freedoms and that under the guise of safety the sheep would all too willingly let them go. Check out Farenheit 9/11 and see the documents which prove this plan. And see where Bush Sr. and Jr. got their political backing. Hint ~ bin laden complete with videos, contracts, and more.

Or continue to believe flight 93 crashed into the ground and buried every piece of the plane 18 foot deep and that no so much as an engine, a wing, or really anything larger than a 8x11" piece of debris at the surface.

Note how dark the beard and chin portion of the beard are in contrast to the rest of the facial hair.

Also note how crisp and sharp that same section is as compared to the rest of the photo which is slightly out of focus, even at that same layer.