Now that @GennetteNicole has broken her #Weinergate silence, I have just a couple of questions for her and @RepWeiner 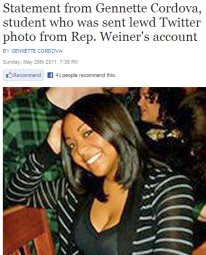 Now that Weinergate has begun seeping leaking into traditional media (e.g., CBS, WaPo and National Review), the intended recipient of the Weiner-shot, Twitter user @GennetteNicole, has posted her side of the story.

• She lays the blame for the Weiner photo on this person, never explaining how Weiner's account was hacked or compromised

• She says that she was not Weiner's girlfriend, had never met him, nor had "any inappropriate exchanges between Anthony Weiner and myself" occurred

Her statement avoids all of the incriminating details, prompting several questions:

1. Had you and Weiner exchanged direct messages before on Twitter? If so, can you reveal the nature of those messages since there weren't "any inappropriate exchanges"?

2. Why did Weiner add the #Thats545InSeattleIThink hash-tag to the tweet just before he the hacker sent the crotch shot? And why did you re-tweet that particular message?

4. Would you agree that there are, as Robert Stacy McCain lays it out describes it, only two alternatives to this story?


Since you obviously believe the first alternative, would you join us in requesting that the FBI investigate this egregious hacking incident immediately?

5. Come to Now that I think of it, have you contacted Rep. Weiner to find out why he hasn't contacted federal authorities regarding this breach of his verified account?

Gennette, I thank you for your public statement. Now it's time to tell the rest of the story. We only want to get the facts straight, right? And ensure this doesn't happen to other young innocents who receive lewd photos from Weiner malicious hackers?

it appeared that Cordova and Weiner — a prolific user of social-networking sites who has run for mayor and indicated he will do so again — had some interaction on Twitter before.

Cordova began following Weiner on Twitter during the time his own tweets previously placed him in Seattle, and according to her statement, he began “following” her on the site, too.

And why was she "scrubbed" from the internet??