Weiner squeezed from all sides

Let's summarize what we know so far of the delightful exploits of Anthony Weiner (Degenocrat-NY). 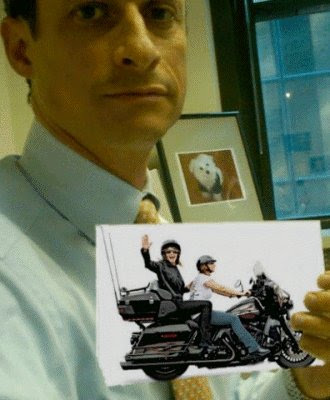 ∞ He sent lewd pictures of himself to a variety of women, including college co-eds; and was in contact with high school girls as well.

∞ When confronted with evidence of his depraved behavior, he publicly lied directly and repeatedly -- with a pathological fervor -- that he had done so

∞ Most importantly, he -- as an important member of Congress and serving on key committees -- exposed himself to blackmail and other skulduggery

But, no, Weiner: don't resign. You're just helping reinforce the reputation of the Democrat Party as not only fiscally disastrous and criminally irresponsible, but also perverted and pathological.

So, please, Weiner: stay in office. You're the new poster boy -- along with Debbie Wasserman-Schultz -- of the proud traditions of the modern Democrat Party.

Don't you think a New Yorker, who is a Jew, should be offended by a hot chatting 911 Truther? Does it show good judgement to send naked pics of your wang to that girl when her picture is on the internet blaming Jewish Neo-cons for 911?