Uncle Ben points us to "The Obama Presidency by the Numbers", which features a nifty chart:

President Obama inherited a deep recession and financial crisis resulting from problems that had been building for years. Those responsible include borrowers and lenders on Wall Street and Main Street, the Federal Reserve, regulatory agencies, ratings agencies, presidents and Congress... Nearly three years since his election and more than two years since the economic recovery began, Mr. Obama has enacted myriad policies at great expense to American taxpayers and amid political rancor... 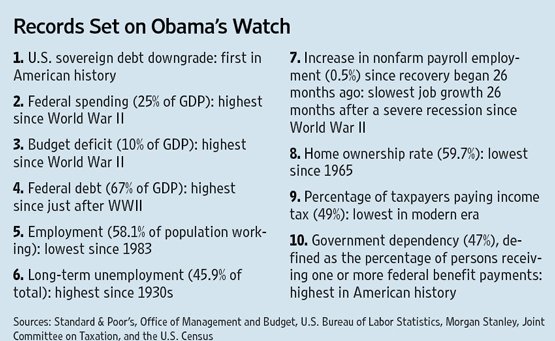 President Obama constantly reminds us, with some justification, that he was dealt a difficult hand. But the evidence is overwhelming that he played it poorly. His big government spending, debt and regulation fix has clearly failed. Relative to previous recoveries from deep recessions, the results are disastrous. A considerable fraction of current joblessness, lower living standards, dependency on government and destroyed savings is the result. Worse, his debt explosion will be a drag on economic growth for years to come.

But, Melvin -- I told ya he was historic!

Home ownership rate the lowest since 1965?
How can that be?
I thought the Community Reinvestment Act was supposed to increase the level of home ownership.

Who wants to buy a mortgaged home now, if you can wait?..On Fox & Friends an 'expert' said long term interests were projected to fall 'significantly' for 30 yr loans....
...from ~4.34 % if my photographic (not) memory is correct !! [ for a good credit rating]