BUT THEY'RE DOING IT FOR THE CHILDREN: Right-to-Work in Michigan Will Cost Union Bosses $100 Million a Year

As the union bosses have admitted, their opposition to right-to-work has nothing to do with kids or education. It's all about the Benjamins. 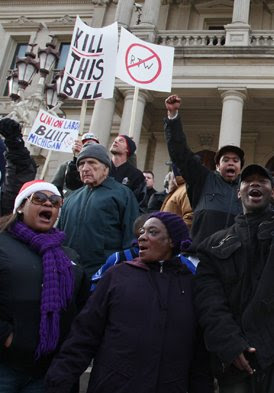 Two Michigan school districts will close Tuesday after hosts of teachers called out sick, apparently to join protests against efforts to pass right-to-work legislation in the state...

The school district superintendent in Taylor, MI, a Detroit suburb, said the district would not have enough teachers to fill the district’s classrooms, according to local news reports. The Taylor Federation of Teachers is reportedly helping to organize the protests...

Polling shows that almost a quarter of union members would stop paying dues if they could. That would cost Michigan unions $100 million a year (they represent 700,000 Michiganders, and their dues average $600 to $900 a year). Union bosses would much rather workers had no choice.

But many workers feel differently. The most vocal calls for right to work have come from workers upset with their unions. Terry Bowman, a member of UAW Local 898 who works at Ford’s Rawsonville plant, argued for right to work long before Republicans considered taking it up; Bowman believes the government should not force workers like him to support a union they oppose.

I have no problem with unions so long as joining and paying dues are voluntary acts.

Collective bargaining is little more than a polite form of indentured servitude. And, depending upon the union, sometimes not so polite.

I can't find anywhere that claims Teachers have mandatory union membership in the NEA, but evidently once in, it was extremely difficult to get out again.

I found a fascinating report by David Kirkpatrick in 1997 (at reason)that included some facts that show exactly why the NEA and public sector unions are such a corruption of the political process. For example:

"In 1960 the NEA assembly had rejected a resolution that “representative negotiations are compatible with the
ethics and dignity of the teaching profession.”12 By 1961 it was advocating collective bargaining.13 The change
did not come easily and was far from complete that year. In the 1960s, contract discussions were generally
referred to as “professional negotiations” rather than “collective bargaining.” The latter term, as well as direct
reference to NEA as a “union,” were anathema to many of the NEA’s members at the time."