Unless Syria's anti-Assad rebels have a full-blown, Hollywood-style makeup department, these snaps of a video uploaded yesterday appear authentic and consistent with a chem attack: 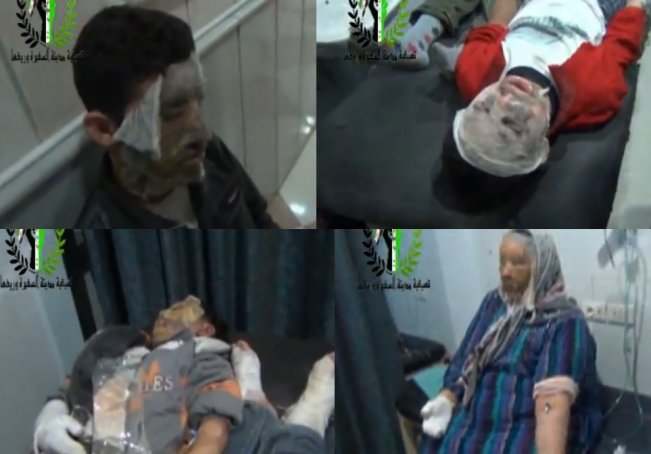 Syrian rebels on Saturday uploaded to YouTube a clip purportedly depicting victims of a chemical weapons attack perpetrated by the regime. The video shows Syrian civilians, some apparently dead and others injured, whose faces were disfigured in a manner that could be caused by a chemical agent.

The rebels claim that the video was filmed in a suburb of Aleppo, where the Syrian regime reportedly maintains its largest depot of chemical weapons.

“We are extremely concerned about the stockpiles of chemical and biological weapons, and we are also concerned about evidence during the last couple of weeks that the regime could use them,” Hague said on the sidelines of a regional security conference in Manama, the capital of Bahrain.

The London-based Sunday Times reported that Israeli commandos were on the ground in Syria, monitoring the regime’s chemical weapons depots.

“For years we’ve known the exact location of Syria’s chemical and biological munitions,” an Israeli source said was quoted as saying. “But in the past week we’ve got signs that munitions have been moved to new locations.”

And where did these chemical weapons come from? Saddam Hussein, it turns out. But don't hold your breath waiting for the Leftists to apologize to George W. Bush vis a vis WMDs.

But, hey: it's time for another presidential vacation. Nothing of significance seems to be happening either here in the U.S. or abroad.

Sorry, I don't believe any of the koranimals. And yes, they do have propaganda "experts." They do this BS to Israel all the time.

And finally, I love it when I see muslims killing muslims.

Not buying it. Nerve agents do not leave external marks to this degree. These individuals look like they've been burned or have had some sort of exposure to an acidic solution. Cyanogens likewise don't leave external marks like this, as their action is hematologic. Injuries appear secondary to some sort of external source. If this came from a rebel source, I'd say it's highly suspect. A couple of the pics appear considerably post-mortem and nothing can be inferred from pics alone. Don't get me wrong, I'm not inferring support for either faction, but I'm calling shenanigans on this. Even old school poisons like phosgene, chlorine and mustard would be hard pressed to make these kinds of marks.

Check out this image from World War I... it is not dissimilar.

Yep...saw both...available on Google. Still don't buy it. I'm saying this with some experience...both military and in the civilian forensic sector. Not to the extent seen in these photos. Again, the uncertainty of time of decomposition renders these photos uninterpretable without more info.