Why am I a conservative? For one, I'm literate. I read history. I know that every government is a social experiment. Every one is an experiment in power and respect, truth and enlightenment, integrity and frailty.

And all too frequently, history teaches us that governments descend into corrupted forms of their original selves no matter how grand their vision. Hitler and Gaddafi, Stalin and Pol Pot, Ivan the Terrible and Genghis Khan are only the most infamous examples of murderous despots bent on destruction, pillage, and mass murder.

The old saw "Absolute power corrupts absolutely" is more than an old saw: it is a truism. Governments are populated with human beings, be they monarchs or elected representatives. And all too frequently -- in fact, in almost every case throughout history -- those in power prove susceptible to base urges, emotions, and predilections. 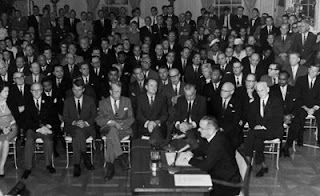 For most rulers, greed turns infectious. Power proves addictive. An almost sexual urge enervates them: to use every means at their disposable to remain seated at the levers of power. This insatiable urge appears wedded to compromised principles, which are inevitably explained away as somehow benefiting the people when in fact it is aimed only at satisfying the gut lust of rule.

Few rulers willingly leave their seats of power; they do so only when forced out whether at the point of a bayonet or through the ballot box.

All of this helps us put the American form of republican government in perspective. Our founders, unlike so many who had the chance, seized power not for themselves but for the people. These men risked their lives and fortunes to resist an unaccountable, authoritarian government. In doing so, they recognized that each attempt at government is a social experiment. Their unique experiences led them to despise tyranny and authoritarianism. They yearned for accountable and responsible government.

In formulating the American system, these men attempted to devise a set of restrictions on government -- on government, not the people -- that would guard against what they knew to be endemic corruption and avarice. Drawing upon the lessons of Montesquieu, Locke, and other political philosphers, these men created a framework for a republican form of government. They separated powers not only between branches of government but between the levels of government.

First Crisis: Leadership. Very few of our leaders -- of either political stripe -- honor their oath of office. Each places their hand on a Holy Bible and recites a pledge to uphold the Constitution. And yet, for the longstanding reasons of avarice and addiction to power, the vast majority promptly ignore the nation's founding document -- its highest law -- and willfully twist it into unrecognizable shapes.

We must demand in our leaders a basic fidelity to the Constitution and replace those who refuse -- whether through word or deed -- to honor it.

Second Crisis: Knowledge. Even a cursory study of human history would reveal a basic truth: the American form of government, while imperfect, is the most perfect structure ever arrived at by man. Whether judged by wealth, by tolerance, by good deeds, by charity, by invention, by scientific advancement, or simply by the number of people trying to immigrate, there can be no doubt that the American form of government has been more successful than any that has come before or since.

We must ensure that our family members, our friends and colleagues have a basic understanding of America's founding. The more one understands the unique, historical significance of America the less inclined he or she would be to sacrifice it on the altar of the Utopian promises of a charismatic demagogue.

Third Crisis: Will. It is easy to lose courage and hope. We live in truly challenging times; the most progressive and corrupt administration in American history -- aided and abetted by a complicit media -- has operated with lawless abandon in pursuit of its Marxist agenda. Even more discouraging are the ostensible leaders of the opposition party. Confronted with political and media bullies, they cower in fear. They stand not on principle or with the vast base of voters that brought them into power, but instead formulate policy behind closed doors with consultants, corporatist donors, and pollsters.

A third party is nonsensical. It is a vote to fail. We must become the opposition party within the opposition party. Just as Ronald Reagan fought the establishment for decades, so too must we continue to fight using the party only as a vessel for our needs.

We face three crises, each one seemingly more daunting than the last. But Americans have faced much tougher challenges before. Washington's surprise attack at Trenton, the Battle of Gettysburg, D-Day, Iwo Jima, Desert Storm, and many other dire struggles in hellholes around the world required the ultimate sacrifice from our best, bravest and brightest. Compared to those heroes, we have it easy.

Each of us can respond to these crises with three consistent actions: (1) vote for integrity; (2) share your knowledge, and (3) will yourself to take action. Each of us must become an agent for Constitutionalism unwilling to take no for an answer.

at 12:45 PM
Email ThisBlogThis!Share to TwitterShare to FacebookShare to Pinterest
Labels: Protecting America

A third party is nonsensical. It is a vote to fail.

No the Republican party is held hostage by the same tripe that runs the Democrats, SAME,SAME.
We need to "walk like an Egyptian"
The price for SAMENESS should be severe.

Check your use of the word, "enervate".

The way the system is currently structured where both parties offer no real choice or representation for conservatives, any vote is a vote to fail. Until such time as a credible third party arises nothing will change.

It is rightly pointed out that a third party will simply divide one block or the other, mostly the Republicans. Be it noted that the Republican Party itself started out as a third party and was not immediately successful. Had a credible third party arisen in 2008 it would have been well on the way to being a majority party in 2016. At which point the the Republicans would go the way of the Whigs in their turn.

The country is already far along the road to civil war, as it was in the 1850's. That trend shows no signs of abating. So long as there is no instrument by means of which the active majority can be obtain government by, for and of the the people the danger of a violent convulsion increases and at some point becomes inevitable.

It's over. Liberty lost and Socialism won. It won decades ago. Watch Friedman's "Free To Choose" - 1980. The government was an enormous cancer even then - 33 years ago - and not even the great Uncle Milty or Ronnie Reagan could save us from it.

No third Party? GARBAGE!
It's not a matter of persuading the Priebusses, McConnells and Boehners of the GOP, it's the deep-pocketed donors who want the status quo. THEY DON'T *WANT* TO CHANGE.

"Changing it from within"....after Bush, Dole, Bush, McCain, Romney (...and THEN what...Jeb Bush or Christie?!) is more delusional than starting anew. Not easy, but more realistic.