Politico and Colin Powell: A Match Made in Intellectual Dishonesty Heaven

The outplacement service for The Washington Post is a website called Politico. It is, in short, the official newsletter of the Democrat National Committee and for certain leakers inside the RINO establishment.

Nothing illustrates the feckless nature of Politico and its Statist agenda better than a story this week headlined "Colin Powell slams North Carolina voting law."

Former Secretary of State Colin Powell bashed North Carolina’s recent voting law at a forum in the state Thursday, with the governor that signed the bill in the audience... Powell said the law harms the Republican Party... 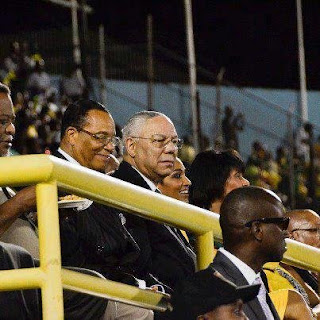 “What it really says to the minority voters is … ‘We really are sort-of punishing you,’” Powell said.

Powell also took aim at defenders of the law, including McCrory, who say such restrictions are necessary to stop voter fraud, which is hard to detect.

“You can say what you like, but there is no voter fraud,” Powell said. “How can it be widespread and undetected?”

I will not denigrate Colin Powell's service to this country, for which I offer my sincere thanks, but when it comes to matters of law and politics, he is a buffoon.

And, for someone who is so fixated on skin pigmentation rather than character, it's difficult to believe Powell missed the story about the "Mississippi NAACP leader sent to prison for 10 counts of voter fraud."

And the fact that more than 50 people employed by or linked with ACORN have been convicted of voter fraud.

During the 2008 election cycle alone, ACORN was linked to as many as 600,000 bogus voter registrations. Combined with their tactics of encouraging early voting and use of absentee ballots, ACORN is responsible for widespread election fraud.

17 seconds using Google would have allowed an honest journalist to quickly debunk Powell's nonsense. But since this is Politico -- and some hack named "Tal Kopan" (if that is his real name) -- we're talking about, any connection to the truth is purely coincidental.


Related: If you read the list of things you need an ID to do, you would -- if you had an ounce of intellectual honesty -- admit that the entire bogus voter ID controversy is about one thing: the Democrats' insatiable desire to destroy the integrity of the ballot box.

Some woman hack from ohio voted 8 times for Obama and was sentenced to 3 years behind bars. But, there is no voter fraud and minorities are just too damn stupid to get an ID.

Colin Powell is a putz...a nobody. He has nothing to offer any political party and a glaring disregard for which end of the pencil to write with.

As a Marine Corps Veteran, I think his record of military service has nothing to do with anything he spews today. His honor,ideology and values were discharged, the same time he was from his military service.

Powell is not stupid,but he is full of lies and deceit. I wonder if it had much to do with his climbing the ranks in the army.