OKAY, NOW YOU CAN PANIC: Harvard Economist Withdraws All of His Money from Bank of America

Terry Burnham, former Harvard economics professor, author of “Mean Genes” and “Mean Markets and Lizard Brains,” provocative poster on this page and long-time critic of the Federal Reserve, argues that the Fed’s efforts to strengthen America’s banks have perversely weakened them.

Why am I getting in line to take my money out of Bank of America? Because of Ben Bernanke and Janet Yellen, who officially begins her term as chairwoman on Feb. 1.

Before I explain, let me disclose that I have been a stopped clock of criticism of the Federal Reserve for half a decade. That’s because I believe that when the Fed intervenes in markets, it has two effects — both negative. First, it decreases overall wealth by distorting markets and causing bad investment decisions. Second, the members of the Fed become reverse Robin Hoods as they take from the poor (and unsophisticated) investors and give to the rich (and politically connected). These effects have been noticed; a Gallup poll taken in the last few days reports that only the richest Americans support the Fed. (See the table.)

Why do I risk starting a run on Bank of America by withdrawing my money and presuming that many fellow depositors will read this and rush to withdraw too? Because they pay me zero interest. Thus, even an infinitesimal chance Bank of America will not repay me in full, whenever I ask, switches the cost-benefit conclusion from stay to flee.

They will not be able to return my money if: 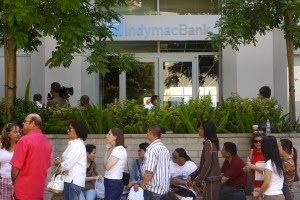 In recent days, the chances for trouble at Bank of America have become more salient because of woes in the emerging markets, particularly Argentina, Turkey, Russia and China. The emerging market fears caused the Dow Jones Industrial Average to lose more than 500 points over the last week.

Returning to my money now entrusted to Bank of America, market turmoil reminded me that this particular trustee is simply not safe. Or not safe enough, given the fact that safety is the reason I put the money there at all. The market turmoil could threaten “BofA” with bankruptcy today as it did in 2008, and as banks have experienced again and again over time.

If the chance that Bank of America will not return my money is, say, a mere 1 percent, then the expected cost to me is 1 percent of my million, or $10,000. That far exceeds the interest I receive, which, I hardly need remind depositors out there, is a cool $0. Even a 0.1 percent chance of loss has an expected cost to me of $1,000. Bank of America pays me the zero interest rate because the Federal Reserve has set interest rates to zero. Thus my incentive to leave at the first whiff of instability.

Surely, you say, the federal government is going to keep its promises, at least on insured deposits. Yes, the Federal Government (via the FDIC) insures deposits in most institutions up to $250,000. But there is a problem with this insurance. The FDIC currently has far less money in its fund than it has insured deposits: as of Sept. 1, about $41 billion in reserve against $6 trillion in insured deposits. (There are over $9 trillion on deposit at U.S. banks, by the way, so more than $3 trillion in deposits is completely uninsured.)

It’s true, of course, that when the FDIC fund risks running dry, as it did in 2009, it can go back to other parts of the federal government for help. I expect those other parts will make the utmost efforts to oblige. But consider the possibility that they may be in crisis at the very same time, for the very same reasons, or that it might take some time to get approval. Remember that Congress voted against the TARP bailout in 2008 before it relented and finally voted for the bailout.

Thus, even insured depositors risk loss and/or delay in recovering their funds. In most time periods, these risks are balanced against the reward of getting interest. Not so long ago, Bank of America would have paid me $1,000 a week in interest on my million dollars. If I were getting $1,000 a week, I might bear the risks of delay and default. However, today I am receiving $0.

So my cash is leaving Bank of America.

But if Bank of America is not safe, you must be wondering, where can you and I put our money? No path is without risk, but here are a few options.

Someone should start a bank (or maybe someone has) that charges (rather than pays) interest and does not make loans. Such a bank would be a good example of how Fed actions create unintended outcomes that defeat their goals. The Fed wants to stimulate lending, but an anti-lending bank could be quite successful. I would be a customer.

(Interestingly, there was a famous anti-lending bank and it was also a “BofA” — the Bank of Amsterdam, founded in 1609. The Dutch BofA charged customers for safe-keeping, did not make loans and did not allow depositors to get their money out immediately. Adam Smith discusses this BofA favorably in his “Wealth of Nations,” published in 1776. Unfortunately — and unbeknownst to Smith — the Bank of Amsterdam had starting secretly making risky loans to ventures in the East Indies and other areas, just like any other bank. When these risky ventures failed, so did the BofA.)

My point is that the Federal Reserve’s actions have myriad, unanticipated, negative consequences. Over the last week, we saw the impact on the emerging markets. The Fed had created $3 trillion of new money in the last five-plus years — three times more than in its entire prior history. A big chunk of that $3 trillion found its way, via private investors and institutions, into risky, emerging markets.

Now that the Fed is reducing (“tapering”) its new money creation (now down to $65 billion a month, or $780 billion a year, as of Wednesday’s announcement), investments are flowing out of risky areas. Some of these countries are facing absolute crises, with Argentina’s currency plummeting by more than 20 percent in under one month. That means investments in Argentina are worth 20 percent less in dollar terms than they were a month ago, even if they held their price in Pesos.

The Fed did not plan to impoverish investors by inducing them to buy overpriced Argentinian investments, of course, but that is one of the costly consequences of its actions. If you lost money in emerging markets over the last week, at one level, it is your responsibility. However, it is not crazy for you to blame the Fed for creating volatile prices that made investing more difficult.

Similarly, if you bought gold at the peak of almost $2,000 per ounce, you have lost one-third of your money; you share the blame for your golden losses with Alan Greenspan, Ben Bernanke and Janet Yellen. They removed the opportunities for safe investments and forced those with liquid assets to scramble for what safety they thought they could find. Furthermore, the uncertainty caused by the Fed has caused many assets to swing wildly in value, creating winners and losers.

The Fed played a role in the recent emerging markets turmoil. Next week, they will cause another crisis somewhere else. Eventually, the absurd effort to create wealth through monetary policy will unravel in the U.S. as it has every other time it has been tried from Weimar Germany to Robert Mugabe’s Zimbabwe.

Even after the Fed created the housing problems, we would have been better of with a small 2009 depression rather than the larger depression that lies ahead. See my Making Sen$e posts “The Stockholm Syndrome and Printing Money” and “Ben Bernanke as Easter Bunny: Why the Fed Can’t Prevent the Coming Crash” for the details of my argument.

Ever since Alan Greenspan intervened to save the stock market on Oct. 20, 1987, the Fed has sought to cushion every financial blow by adding liquidity. The trouble with trying to make the world safe for stupidity is that it creates fragility.

Bank of America and other big banks are fragile — and vulnerable to bank runs — because the Fed has set interest rates to zero. If a run gathers momentum, the government will take steps to stem it. But I am convinced they have limited ammunition and unlimited problems.

What is the solution? For you, save yourself and your family. For the system, revamp the Federal Reserve. The simplest first step would be to end the dual mandate of price stability and full employment. Price stability is enough. I favor rules over intervention. We don’t need a maestro conducting monetary policy; we need a system that promotes stability and allows people (not printing presses) to make us richer.

I have a little bit of a problem taking seriously the advise of anyone who for any reason at all keeps $1,000,000 in a checking account.

And where should he keep his million?

I know the s is about to hit the fan but I too find it difficult to believe an "economist" has a million let alone in a checking account. Where should he keep it? I have a few ideas but I sure as hell wouldn't ask him for advice.

I don't have a million. What I do have is my monthly income. What I do is draw it down, buying beans, bullets, and if silver halves then I will buy in then. I keep just enough in for any kind of... short term need. I won't be "saving"* for as long as I can see.

Oh, and forget about the stock markets and commodities, at the bubble levels they currently run. A million dollars? Raw diamonds, maybe? I haven't looked at other liquid or semi-liquid assets, and whether those are all bubbled, but I would be afraid... if I wanted to tend that.

Reply to Anonymous who said:
"I have a little bit of a problem taking seriously the advise of anyone who for any reason at all keeps $1,000,000 in a checking account."

You would have to know the details of his accounts to know if your statement is anywhere near correct.

I leave my business funds in an interest-bearing checking account instead of a savings account because it pays a similar interest to savings accounts, and I am allowed to because the government has allowed the banks to give interest to sole-proprieterships only--not for incorporated businesses or for LLC's.

You need more of his account details to even guess why he had his money in a certain account.

in any case, the FDIC insures only up to 100% of deposits in each account--up to between $100,000-$150,000 per account, So anything over that in a single account is not covered by FDIC insurance anyway. Maybe the author doesn't know the limitations of FDIC insurance.

So I guess for long term storage, even if checking accounts are interest bearing, I would have 10 accounts or so that the full deposited amount would be covered by FDIC in the event of a bank crash.

But it would complicate your checking...

Crap, now what do I do?
Terry recently sent the wife and I a new Futon. This is one comfortable mattress. I think that once we took possession it became our property, but now I find myself second guessing his motives as well as when he expects the return of his investment.