Health Reform: Despite White House claims no one has to pay ObamaCare's individual mandate tax until next year, a Web heavyweight points out that self-employed individuals file their estimated taxes this year for 2014. 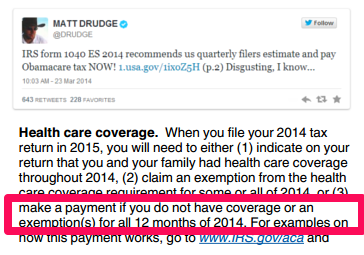 In what could be the tweet heard around the world, Internet icon Matt Drudge tweeted at 11:09 a.m. Friday:

"Just paid the ObamaCare penalty for not 'getting covered' ... I'M CALLING IT A LIBERTY TAX!"

Lee's tweet shows just how little the White House knows about business, particularly small business, and the self-employed individuals such as Matt Drudge who file as small businesses and who each year must not only settle up for the prior year by mid-April but must also pay their first-quarter estimated taxes for the current year.

The Obama administration's media sycophants were no better informed, with the Washington Post's Greg Sargent blogging by midafternoon:

"Matt Drudge proudly tells the world he paid the penalty for not having health coverage, which he has termed the 'liberty tax.' Which is odd, because no one has to pay the penalty until they file their 2014 tax returns in April 2015."

While some, such as Timothy Geithner, can be Treasury secretary in the Obama administration while playing fast and loose with skirting their tax obligation, self-employed individuals who operate as small businesses do not. This is particularly true of right-wing notables, something Drudge explained to the hyperventilating left in a subsequent tweet.

Drudge indicated in follow-up tweets that since he is self-employed as proprietor of the Drudge Report, he files as a small business. Drudge followed up with "Dazed team Obama media reporters think Opt-Out tax 'year away'? Not for small businesses that file Qtr estimates. We're there NOW, baby."

"As a self-employed individual, generally you are required to file an annual return and pay estimated tax quarterly," the IRS website states.

IRS form (1040-ES) for estimating quarterly taxes specifically recommends adding the mandate penalty to line 12 for "other taxes" — to pay before the first quarterly deadline of April 15.

"It is true that thousands of small businesses will be forced to pay ObamaCare taxes quarterly in 2014," a Senate Budget Committee aide told Breitbart News on Friday afternoon.

An administration elected by low-information voters is populated with low-information officials who are ignorant of the laws they are charged to enforce even though they often misuse them — as in the case of IRS targeting of Tea Party groups — for their own political purposes.

Self-employed entrepreneurs ranging from Drudge to small-shop proprietors and independent contractors have long been aware of the requirement to estimate their tax liability and send a quarter of it in every three months, and that this amount includes "other taxes" such as the ObamaCare opt-out penalty.

When you tax something you get less of it, and certainly ObamaCare leaves us with less freedom. We lose the freedom to buy the insurance plans of our own choosing and the freedom to pick our doctors. Our nation was born in revolt against such oppressive taxation. The penalty imposed under ObamaCare for refusing to be compelled to buy a product you don't want is indeed a tax on our liberty.

My hatred for the Government now knows no bounds. It is "US" or "them".

Hey Hey, Ho Ho the Kenyan and his Wookie have to go.
If the Republic is to survive there must be a clean sweep in November.

imagine America has the liar of the year 2013 obama,, a stupid white house that can't tell the truth sebelius doesn't know what the truth looks like and hose establishment rinos who care more about illegals amnesty than American citizens