Just when you think the Democrat Party has hit rock bottom, they break out the jackhammer and start digging a new sub-basement:

Planned Parenthood Federation of America (PP) announced that House Democratic Leader Nancy Pelosi, an alleged Roman Catholic, will be given “the Margaret Sanger Award, the organization’s highest honor, in recognition of her leadership, excellence, and outstanding contributions to the reproductive health and rights movement over the course of her career,” according to a Planned Parenthood website posting...

Margaret Sanger was hardly the woman's rights hero that the modern Left markets. In fact, she was an advocate for the Ku Klux Klan and a zealot for culling out "inferior" races from the nation's gene pool.

Sanger wanted a new and improved race: ‘[We should] apply a stern and rigid policy of sterilization and segregation to that grade of population whose progeny is tainted, or whose inheritance is such that objectionable traits may be transmitted to offspring.’ 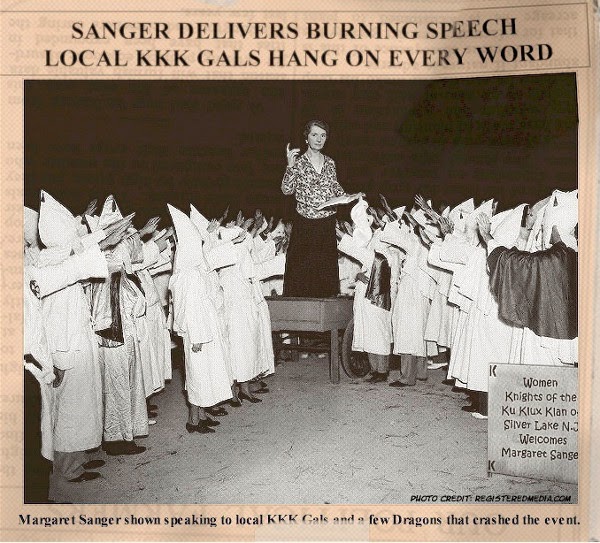 Then there was the April 1932 Birth Control Review, p. 108[, in which she stated]: Birth control must lead ultimately to a cleaner race.

Sanger is said to have believed that the Negro race was inferior and, as such, should be culled through sterilization.

Lloyd Marcus, author of Confessions of a Black Conservative, provides some perspective to address this peculiarity, and shares some truths about what the left’s devotion to abortion has wrought, specifically in regard to American blacks.

“Colored people are like human weeds and are to be exterminated.” So said Margaret Sanger, founder of Planned Parenthood. Seventy-eight percent of Planned Parenthood clinics are in black neighborhoods. Blacks make up only 12% of the population, but 35% of America’s aborted babies are black. Half of black pregnancies end in abortion. Is this an intentional genocide? (Emphasis added)

”The most dangerous place for an African-American is in the womb,” according to Pastor Clenard Childress, Jr. Blacks are the only minority in America experiencing a declining population.

So why would Obama, the NAACP, Rev. Sharpton, and other black leftists be passionate supporters of Planned Parenthood? Why did Al Sharpton threaten to protest a pro-life billboard which exposed the devastatingly high number of black abortions?

Congratulations on your award, Nancy Hitler.

Did you dig that picture out of the DNC archives?

Sanger was garbage but more than likely that picture is photoshopped. That doesn't mean she didn't speak at Klan meetings but I don't believe actual photos exist of it.

Doug, you should really get rid of the fake stuff about Sanger, such as the picture (evidence here: http://saynsumthn.wordpress.com/2009/10/01/correcting-glenn-beck-on-interview-margaret-sanger-and-false-kkk-klan-photo/ )
and the quote:
“Colored people are like human weeds and are to be exterminated.” (See Zombie's recent essay where he provides some great Sanger quotes, but says this one's a fake.)