That means... one tiny atom... in my fingernail could be like... could be one little... tiny universe!?!

The only reason I posted this link is because the accompanying picture is too cool and the whole concept is mind-blowing. And I know that's two reasons, but... physics. 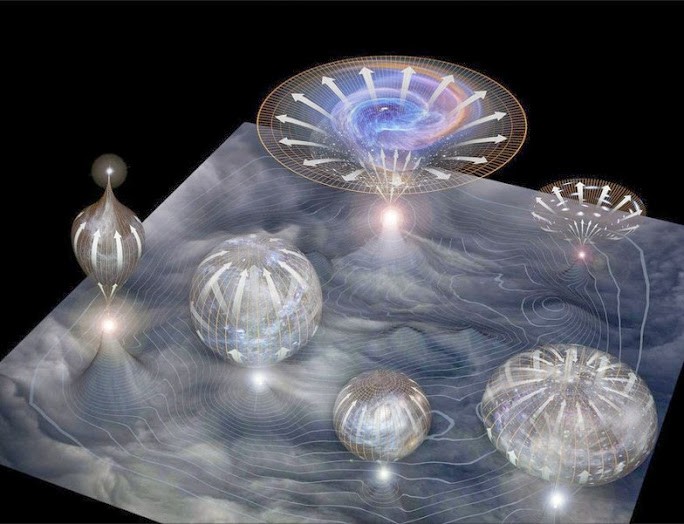 This illustration depicts a main membrane out of which individual universes arise.

Gravitational waves rippling through the aftermath of the cosmic fireball, physicists suggest, point to us inhabiting a multiverse, a universe filled with many universes...

That's because those gravitational wave results point to a particularly prolific and potent kind of "inflation" of the early universe, an exponential expansion of the dimensions of space to many times the size of our own cosmos in the first fraction of a second of the Big Bang, some 13.82 billion years ago...

...Essentially, in the models favored by the BICEP2 team's observations, the process that inflates a universe looks just too potent to happen only once; rather, once a Big Bang starts, the process would happen repeatedly and in multiple ways...

"A multiverse offers one good possible explanation for a lot of the unique observations we have made about our universe," says MIT physicist Alan Guth, who first wrote about inflation theory in 1980. "Life being here, for example."

The Big Bang and inflation make the universe look like the ultimate free lunch, Guth has suggested, where we have received something for nothing... But Linde takes this even further, suggesting the universe is a smorgasbord stuffed with every possible free lunch imaginable.

That means every kind of cosmos is out there in the aftermath of the Big Bang, from our familiar universe chock full of stars and planets to extravaganzas that encompass many more dimensions, but are devoid of such mundane things as atoms or photons of light.

In this multiverse spawned by "chaotic" inflation, the Big Bang is just a starting point, giving rise to multiple universes (including ours) separated by unimaginable gulfs of distance. How far does the multiverse stretch? Perhaps to infinity, suggests MIT physicist Max Tegmark...

This is all very cool and way behind my tiny brain's ability to comprehend. My only fear is that Democrats will soon try to regulate this, insisting it's required to save humanity. Kinda like global warming only on a cosmic scale.

at 8:37 PM
Email ThisBlogThis!Share to TwitterShare to FacebookShare to Pinterest
Labels: Engineering, Scitech

I have always suspected this was possible- why not

Maybe the Democrats will try to regulate it, the Republicans will just deny it all.

@anon - you mean like a baby isn't really alive until it's outside of the womb and can be killed 'til that moment?