The amount of debt globally has soared more than 40 percent to $100 trillion since the first signs of the financial crisis as governments borrowed to pull their economies out of recession and companies took advantage of record low interest rates, according to the Bank for International Settlements. 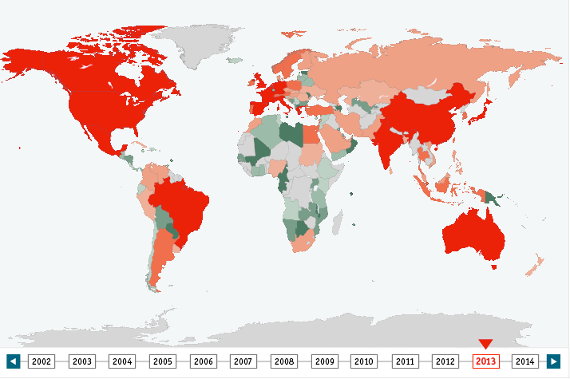 The $30 trillion increase from $70 trillion between mid-2007 and mid-2013 compares with a $3.86 trillion decline in the value of equities to $53.8 trillion in the same period, according to data compiled by Bloomberg. The jump in debt as measured by the Basel, Switzerland-based BIS in its quarterly review is almost twice the U.S.’s gross domestic product.

That's right: the global debt accrued in the last six years alone is more than double the amount of all the goods and services produced in the United States each year.

Can you say, "will never be repaid"?

Borrowing has soared as central banks suppress benchmark interest rates to spur growth after the U.S. subprime mortgage market collapsed and Lehman Brothers Holdings Inc.’s bankruptcy sent the world into its worst financial crisis since the Great Depression. Yields on all types of bonds, from governments to corporates and mortgages, average about 2 percent, down from more than 4.8 percent in 2007, according to the Bank of America Merrill Lynch Global Broad Market Index.

“Given the significant expansion in government spending in recent years, governments (including central, state and local governments) have been the largest debt issuers,” according to Branimir Gruic, an analyst, and Andreas Schrimpf, an economist at the BIS.

Now, those activities might be acceptable had governments exhausted all measures to reduce overhead, suppress regulations, and otherwise promote free market activities.

Of course, that's not what happened because -- for the most part -- Democrats, leftists and other Marxists were in control of many large economies. So they printed money and spent. Not on investments, as they claimed. No, they redistributed it on "green job" scams, union payoffs, a massive expansion of the welfare state, and payoffs to crony capitalists,

As Bloomberg -- not the bizarre wannabe tyrant, but the news service -- notes, the amount of outstanding U.S. government has nearly tripled in the last six years, from $4.5 trillion to $12 trillion.

Nothing good will come of this madness because the old truism is just that.

There ain't no such thing as a free lunch.

I appreciate you and I would like to read your next post. Thanks for sharing this useful information.
when you start a business then at first you need every business related news. we find a real news that help for your business.
forex business news, financial news, forex factory news, forex trading