RUMBLE: Is Illinois Finally Ready to Embrace Fiscal Sanity by Electing its Own Scott Walker?

Politics: The primary victory of a private-equity millionaire who believes in term limits and curbing the incestuous power of public-sector unions has a real shot at becoming Illinois's first GOP governor in a decade. 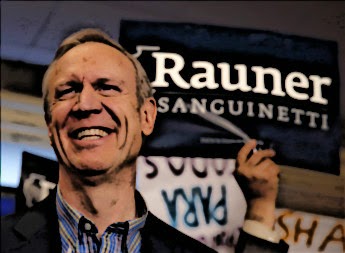 That Illinois, arguably the bluest of blue states, may turn red in November may seem implausible. But then, it wasn't that long ago that a relatively unknown Scott Walker was tilting at union windmills in Wisconsin. Bruce Rauner, victor in Illinois' gubernatorial primary Tuesday, has taken dead aim at the same target, and in a state beleaguered by debt, taxes and unfunded pension liabilities he is given a real shot.

Rauner, a self-made, private-sector millionaire who said in his ads, "I can't be bought," argued for term limits as a way of keeping government officials from enriching themselves at public expense. Three recent Illinois governors have found their way to prison, the latest being Rod Blagojevich, famous for trying to sell President Obama's old Senate seat to the highest bidder.

Rauner took on the public-sector unions early. "The government-union bosses are at the core of our spending problem in Illinois," he said in a primary debate, arguing that public unions create a "conflict of interest for the taxpayers" and have made a mess of the state's finances.

Like Wisconsin's Walker before him, he decries the system of tax, tax, spend, spend, elect, elect that lets public-sector unions feed at the public trough while campaigning to elect pro-union politicians.

Illinois unions obviously are worried about Rauner. The American Federation of State, County, and Municipal Employees (AFSCME), the Illinois Education Association and the Illinois Federation of Teachers spent upwards of $3 million attacking him and trying to divert votes to one of Rauner's primary opponents, a state senator and aide to former Illinois Gov. Jim Edgar, Kirk Dillard.

"Illinois is part of the pattern — these rich folks are going wherever they see an opportunity, just like they did in Wisconsin, Indiana and Michigan," said Henry Bayer, executive director of the AFSCME Council 31, representing 95,000 workers and retirees in the state. "Illinois is experiencing some real difficulties, so they think they can make some inroads."

The natives are restless in the Land of Lincoln. In January, the state had the country's third-highest unemployment rate at 8.7%, the lowest credit rating, and the highest unfunded pension liability at $100 billion. It has suffered 13 downgrades from the three major rating agencies since Gov. Pat Quinn took office in 2009.

Rauner supports shifting public workers to 401(k)-type plans from traditional defined-benefit pensions that give retirees a payout based on years of service and final salary. Public-employee unions are "organized against the public good," Rauner said during a March 13 debate in Chicago. His animus toward unions is coupled with his support of charter schools that aren't burdened by them.

Since Walker pushed through collective-bargaining restrictions in 2011, membership in AFSCME in the state where the union was born has plunged 60%. Republican governors and state legislatures in Indiana and Michigan passed laws exempting non-union employees from paying dues.

"The folks in Illinois sort of feel like they're surrounded," said Robert Bruno, a professor of labor and employment relations at the University of Illinois at Urbana-Champaign.

Neighbors like Wisconsin (where the legislature just passed a tax-cut plan that Walker sought), Indiana and Michigan have either challenged the unions on pension reform or embraced right-to-work to encourage the economic growth to fund them. But Illinois remains in thrall to big labor, and unions there are petrified that Rauner could be the next Walker.

Rauner and his wife are friends with Rahm Emmanuel. If he's a Republican, I'll eat my hat.


Tell me it isn't so, the IBD staff has fallen for this rouse? Rauner is a life long demoCrap and known as Rahm's money man.

His wife is a obozo sycophant and a far left wing moonbat.

Rauner might have an R behind his name but that is as close to being conservative as he gets I understand.