One upon a time everyone got a hearty chuckle when Obama declared, on the very first day of his ascension to the throne, that his administration would be the "most transparent in history." And if they didn't then, they certainly will now following news that it is none other than Obama's own administration - made infamous for spying on everyone who uses electronic communication courtesy of one whistleblower - that it has refused a record number of Freedom of Information (don't laugh) requests on the basis of, drumroll, national security. So between the NSA, whose job is to ensure national security, and all those pesky meddlesome investigators, whose only curiosity is to peek behind the secrecy of the Obama administration, there should be precisely zero acts of terrorism on US soil. Like last year's Boston bombing for example. Oh wait... 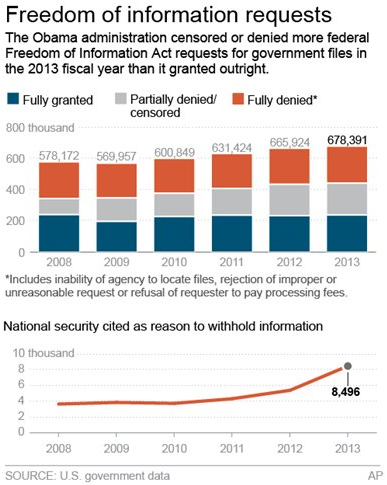 The Obama administration more often than ever censored government files or outright denied access to them last year under the U.S. Freedom of Information Act, according to a new analysis of federal data by The Associated Press.

The administration cited more legal exceptions it said justified withholding materials and refused a record number of times to turn over files quickly that might be especially newsworthy. Most agencies also took longer to answer records requests, the analysis found.

The government's own figures from 99 federal agencies covering six years show that half way through its second term, the administration has made few meaningful improvements in the way it releases records despite its promises from Day 1 to become the most transparent administration in history...

...Last year, the government denied 6,689 out of 7,818 requests for so-called expedited processing, which moves an urgent request for newsworthy records to the front of the line for a speedy answer, or about 86 percent. It denied only 53 percent of such requests in 2008.

The U.S. spent a record $420 million answering requests plus just over $27 million in legal disputes, and charged people $4.3 million to search and copy documents. The government waived fees about 58 percent of the time that people asked, a 1 percent improvement over the previous year.

Sometimes, the government said it searched and couldn't find what citizens wanted.

And yes, if you were wondering, the government did spend thousands on "How to Google... for Idiots" classes for its employees.

The Office of the Director of National Intelligence, whose top official has testified to Congress repeatedly about NSA surveillance programs disclosed by contractor Edward Snowden, told the AP it couldn't find any records or emails in its offices asking other federal agencies to be on the lookout for journalists to whom Snowden provided classified materials. British intelligence authorities had detained one reporter's partner for nine hours at Heathrow airport and questioned him under terrorism laws. DNI James Clapper has at least twice publicly described the reporters as "accomplices" to Snowden, who is charged under the U.S. Espionage Act and faces up to 30 years in prison.

Likewise, Cook, departing as the editor at Gawker, was exasperated when the State Department told him it couldn't find any emails between journalists and Philippe Reines, Hillary Clinton's personal spokesman when Clinton was secretary of state. BuzzFeed published a lengthy and profane email exchange about the 2012 attack on the diplomatic mission in Benghazi between Reines and its correspondent, Michael Hastings.

"They said there were no records," Cook said of the State Department.

The snide tone in the AP piece is amusing: it is almost as if the AP thinks it is justified in its berating of America's most totalitarian regime. One would almost think the AP had scores of its phone lines tapped directly by the Department of Justice. Oh wait, we did it again.

In category after category — except for reducing numbers of old requests and a slight increase in how often it waived copying fees — the government's efforts to be more open about its activities last year were their worst since President Barack Obama took office.

In a year of intense public interest over the National Security Agency's surveillance programs, the government cited national security to withhold information a record 8,496 times — a 57 percent increase over a year earlier and more than double Obama's first year, when it cited that reason 3,658 times. The Defense Department, including the NSA, and the CIA accounted for nearly all those. The Agriculture Department's Farm Service Agency cited national security six times, the Environmental Protection Agency did twice and the National Park Service once.

And five years after Obama directed agencies to less frequently invoke a "deliberative process" exception to withhold materials describing decision-making behind the scenes, the government did it anyway, a record 81,752 times.

"I'm concerned the growing trend toward relying upon FOIA exemptions to withhold large swaths of government information is hindering the public's right to know," said Sen. Patrick Leahy, D-Vt., chairman of the Senate Judiciary Committee. "It becomes too much of a temptation. If you screw up in government, just mark it top secret."

But why the concern citizen, and member of Congress - it is not as if the CIA was spying on you. Oh crap: there we go again.

That said, we suggest simply assuming that St. Obama of Hawaii is merely from the government and thus is here to assit. It helps when the time for the frontal lobotomy arrives. Plus all other thoughts are racist.

For all those unlucky few who still do have a frontal lobe, are able to process logic and remember how to read, the remainder of the AP article can be found here.