The only thing more callous than this would be to receive a piece of junk mail from Publisher's Clearinghouse announcing your loved one's death.

It's hard to imagine receiving a worse text message than the one sent to the families of the 239 people aboard Malaysian Air flight 370.

Here's the text message that was sent to relatives (the Chinese translation you see here is generated by the user's phone)... 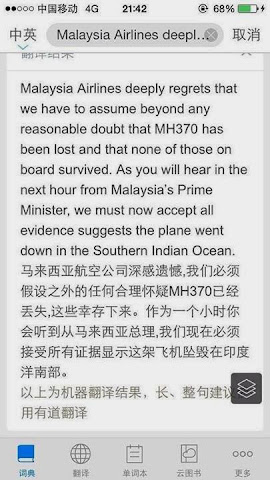 ...The message came shortly before Malaysian Prime Minister Najib Razak told a packed press conference that data from Britain's Air Accidents Investigation Branch and the satellite company Inmarsat indicated that the airplane went down in a remote part of the Indian Ocean and that all aboard were presumed dead.

Even a postcard would have been more heartfelt than a text message, for heaven's sake.

at 7:56 PM
Email ThisBlogThis!Share to TwitterShare to FacebookShare to Pinterest
Labels: extremism, World