Vowing not to be outdone, Hillary unveils her own version of iconic tattooed Cruz poster 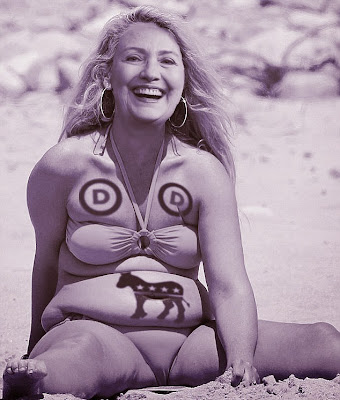 What is the point of this degrading picture? There are PLENTY of reasons to oppose an HRC candidacy based on ideology, policy disasters, cover-ups, illegal activity, etc. This kind of "opposition" undermines everything that conservatives hope to fix in this country.

We do not have to stoop to this level. We're not like the leftists who resort to this kind of thing when their arguments fail (or at least, we shouldn't be.) We actually have ideas and plans that work.

Get rid of it.

In the words of MOTUS, "Alinsky works for us now."

I'm not putting up with their destruction and demonization of our perfectly legitimate candidates, nor should you.

If you don't like it, don't let the blog's door hit your ass on the way out.

I do have a point, though. Leftists use Alinsky methods precisely because they can't argue with conservatives on the merits of their ideology--not and legitimately win, anyway. We don't need to use Alinsky methods against them to win. And we shouldn't. We do need to understand their methods, so we can outflank them.

You can't possibility think that we (conservative women) are happy because, yea! now the leftist women are getting theirs!

And it is much, much worse for our side to do this because
a) we actually have great ideas. And not just ideas, but a history of successful implementation of those ideas to the benefit of the entire country. We should never stoop to mere personal attacks;
and b) it can hand leftists some actual ammunition, when otherwise, they've got nothing. Which do really think is going to be more known--a personal attack on a conservative woman by a leftist or one on a leftist woman by a conservative or Republican? Exactly!

Attacking anyone, man or woman (although it's mostly women,) on the basis of personal appearance is just so lame. Puerile. Detrimental to our cause. And completely irrelevant.

Listen, punk, we all have different tolerance levels...DEAL with it.

Your BS about us having "better" ideas is great mental onanism. Ideas are only as good as their ability to persuade.

Political AgitProp is one VERY VERY effective tool to persuade.

Take your limp-wristed, hand-wringing whining (yes...yes...you really *do* "care", I'm sure...) and crawl back to the Headquarters of the next RINO loser, HuffPo, or wherever you came from.

Your attitude DISGUSTS me.

I neglected to praise the graphic.
It humiliates the next dictator-wannabe quite well.

(Poor, poor briarhopper thinks all those little, weak women need to be protected...how PajamaBoyish of him!)

Google the graphic KILLARY KLINTON for another good image.

Funny this picture is so degrading but it was okay when Cruz's tat pic got passed around. Understand lefties, what is okay for you, is okay for us. We are no longer the silent do nothing fools you were so use to dealing with.

Briarhopper, you should use your enemies tactics against them. They generally use them because they can think of no effective counter.

Ridicule is one of the most effective tactics,especially in the beginning of the end.They(libtards)have called liberty minded folks every name in the book,including some I in 59 years had never heard before.Lying while doing the opposite and obfuscation is the Alinsky way.Attack on all fronts and overwhelm the system.Its long past due for some payback on the nanny state overlords.

I read the first guys comments and don't feel the need to read the rest. He is right. We do not need to attack Hilary based on her appearance, as fun as that might be as we all despise her. All that does is make her the victim. Last thing we need is for that tyrant to portray herself as victim.

What has been seen cannot be unseen, nor forgotten.
Thanks a bunch.
Howz about a little warning next time, and I'll be sure to keep sharp pointy things out of sight so I won't be tempted to poke out my eyes.
Bleeech!

I'm amazed at how many people think this isn't a real life picture of Shrillery. The only thing I thought might be photo shopped is the tattoos.

Yes, Anonymous II, ridicule is a very effective weapon and we should wield it against ideologies, policies, institution, and actions (see the excellent political cartoons of Michael Ramirez.) Although the actions of this administration demand condemnation and prosecution, not just ridicule.

There are some people who are never going to change their political stripes, no matter how effective our arguments. We used to call these Dead Dog Democrats. >You realize, you should hear this in your head as Dade Dawg Democrats. ;) <. It would be a waste of time to even try reasoning with them.

But there are those, and probably more right now than ever because of the massive failures and over reach of the Obama administration, who will listen and consider the idea that the US Constitution is actually a simple and easily understood document that clearly outlines the rights of the individuals and the restraints placed on government, especially the federal govt. But we risk losing the opportunity to engage with those potential supporters when we participate in the "politics of personal destruction." It is very easy to dismiss some one who is just name calling.

My personal voting philosophy is I will never vote for a leftist either by commission or omission. To me that means that the real fight for the heart of the Republican Party is at the state and local levels and in the primaries for federal office. This is where we have our best chance for real change. But if, for example, Kentuckians fail in their attempt to ditch Mitch in the primary, I would still vote for Mitch in the general election, because even the most sticky of GOP establishment's barnacles can have their feet held to the fire. We wouldn't have any leverage of that sort with a leftist. (Personally, I think Matt Bevins can beat Mitch McConnell, and if the remarks of my family in KY are any indication, MM is gone, thank goodness.)

I've been, um, invited :) to leave this blog, but I'm not going to. I find it a very effective tool for dissemination of news and opinions. I tweet everything I see here about Benghazi and the betrayal of the GOP establishment. I'm not able to gather all this information myself and I'm glad to have this resource for my use.

Sorry, but I agree with briarhopper...... What is that saying about wrestling with pigs..."I learned long ago, never to wrestle with a pig. You get dirty, and besides, the pig likes it."
If conservatives act like libtards, why bother being on the "uncool" side?

Your smugness does not cover up your cowardice, inexperience or blind submission to the Republican Establishment. You go your way (based on the "track record" shown above, LOSER), and we'll win IN SPITE OF YOU.

Is Bill fingerpainting now or is this Hillary's way of outclassing Monica.