O'S PARTNERS IN PEACE: Iranian Military General Swears on His Religion That They Will Annihilate Israel

When it comes to Barack Obama, there are -- best I can tell -- three possible reasons for his catastrophic track record.

Imagine a Venn diagram with three interlocking circles. One is labeled Marxism, the other is marked Hatred, and the last one is captioned Ignorance. All three circles overlap with different ratios depending upon the actual policy. 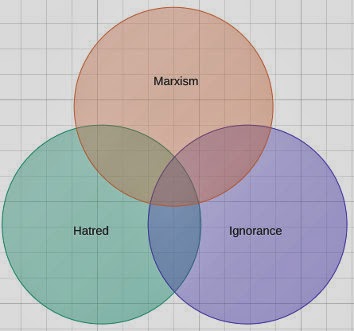 Take Obama's Middle East policy. Please. He has, in just five short years, isolated our strongest ally Israel; attempted to prop up the Nazi-aligned Muslim Brotherhood in Egypt; toppled a strongman in Libya leaving Al Qaeda in charge; permitted a U.S. ambassador and other diplomatic personnel to be slaughtered during a seven hour gunfight without lifting a finger to help; failed to pursue said terrorists despite multiple promises to do so; and attempted to interfere in Syria by drawing bogus "red lines" failing only after Congress refused to empower evil bastards of one stripe or another.

But the worst element of all of Obama's miserable foreign policies failures relate to Iran. During the Green Revolution that threatened to topple the Islamofascist Mullahs, Obama refused to speak out during the critical first week of riots and protests. Eventually the resistance movement was crushed thanks to Obama's inaction and -- seemingly -- tacit endorsement of the Mullah's actions.

Then there's Iran's nuclear program, which no credible observer believes is destined for anything except for the manufacture of atomic bombs. Instead of choking the Islamofascists through sanctions, Obama instead argued for relaxing the economic noose.

And his reward is the entirely predictable set of statements coming out of Tehran.

Iranian Deputy Commander Warns They Are Ready to Annihilate Israel 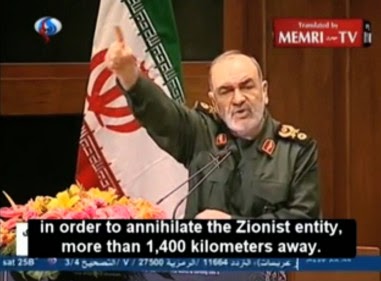 MEMRI. Org: Speaking at a conference held in Tehran, Iran's Revolutionary Guard Corps (IRGC) Deputy Commander Brigadier-General Hossein Salami said: “We, here, can muster all our energies in order to annihilate the Zionist entity, more than 1,400 kilometers away. We are ready for that moment in the future.”

Following are excerpts from the speech, which aired on Al-Alam TV on March 11, 2014.

The answer is that the religion of Islam has designated this for us – this goal, this motivation, this belief, this energy – so that we, here, can muster all our energies in order to annihilate the Zionist entity, more than 1,400 kilometers away. We are ready for that moment in the future.

These Islamonazis are Obama's "partners in peace". His negotiating partners. His pals.

Can it be any more clear what Barack Hussein Obama's true agenda is?

A number of people have been saying for some time that Barry is not acting ignorantly, his plan is deliberate;
and it is treason.

It is worse than treason... it is demonic.