Courtesy of Tammy Bruce, those of us who were enjoying Opening Day, or working, or otherwise ignoring the disaster that is this administration, can get the complete Obamacare wrap-up.

1. At the oh-so-tactful Jezebel, "Obamacare Website Takes a Dump on Obamacare Enrollment Deadline. 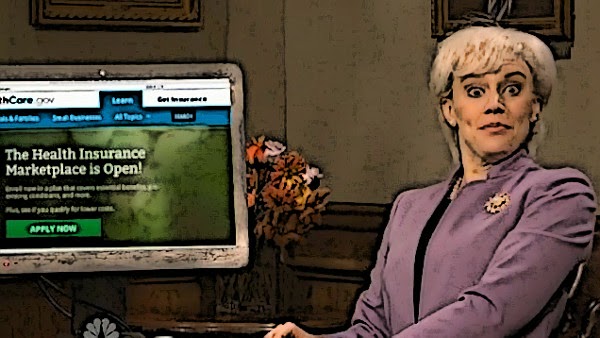 Today's the last day to sign up for Obamacare if you're planning on using the healthcare.gov website. Unfortunately for people who tried to log onto the website during the wee hours of the morning today, that wasn't possible for a few hours. Because the website was down.

2. Daniel Halper says that "Sebelius Speechless After Reporter Tells Her How Unpopular Obamacare Is"

"At last check, 64 percent of Oklahomans aren't buying into the health care plan, they don't like Obamacare, and they've been pretty vocal about it," said the reporter. "Now that's going to be -- still continue to be -- a tough sell, but we'll see how that plays out over the coming months."

Then he waited for Sebelius to reply. And waited.

After about 7-seconds of dead air, the reporter broke in to say, "Alright, Secretary Sebelius, thank you so much for being with us this morning. I think we've probably lost sound here or something."

"I can hear you," Sebelius said, ending her silence.

Sen. John Barrasso has accused the Obama administration — which just claimed more than 6 million Americans have enrolled in Obamacare — of spinning the numbers on the federal health care overhaul and “cooking the books... I don’t think it means anything. I think they’re cooking the books on this.”

The White House still hasn’t released how many of the 6 million enrollment figure actually paid...

4. Chaser: "Valerie Jarrett to Hollywood to Get Obamacare in Movie, TV Scripts"

Valerie Jarrett explained in an appearance on Top That! on PopSugar.com...

That Valerie Jarrett's quite the looker.

I'm sure she'll do a great job marketing Obamacare.

Is that Pajama-boy with Valerie?