JAIL THE GLOBAL COOLING DENIERS: @AdamWeinstein and @MichaelEMann must face the music

The science is settled:

HadCRUT4, the last of the five monthly global datasets to report its February value, shows the same sharp drop in global temperature over the month as the other datasets... 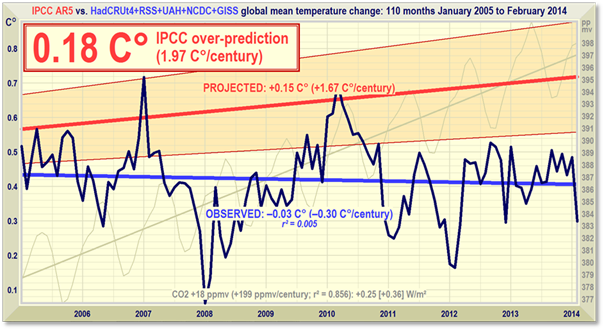 ...Our dataset-of-datasets graph averages the monthly anomalies for the three terrestrial and two satellite temperature records. It shows there has still been no global warming this millennium. Over 13 years 2 months, the trend is zero.

The reason for the headline? Adam Weinstein of Gakwer is the same nitwit who wants the majority of scientists in the world jailed for expressing skepticism of the United Nation's global warming scam.

After all, "only 36 percent of geoscientists and engineers believe that humans are creating a global warming crisis, according to a survey reported in the peer-reviewed Organization Studies."

But do you want to know the funniest part of the global warming scam?

The fact that Al Gore, the man with one of the largest carbon footprints in the world, tells us that the ocean levels are rising and that temperatures are soaring.

Yet Gore recently bought his third (or fourth, I lost count) immense mansion... in sunny California, within a stone's throw of the ocean.