WARMAL COLDING TO SLAM U.S. AGAIN NEXT WEEK: Coldest Opening to Spring in at Least 50 Years

I'm so confused: I thought Al Gore promised that the polar icecaps were certain to melt by 2012. Instead, they seem to be moving southward:

I am 58.. never seen anything close to this for late March... [The] pattern next week has as much extreme potential for the time of the year as I can find. Coldest opening to calender spring in 50 yrs at least.

Weather forecast models such as the ECMWF and NCEP, both of which have had good track records this year in identifying polar vortex outbreaks in advance, are now forecasting a massive cold blast for the beginning of spring... 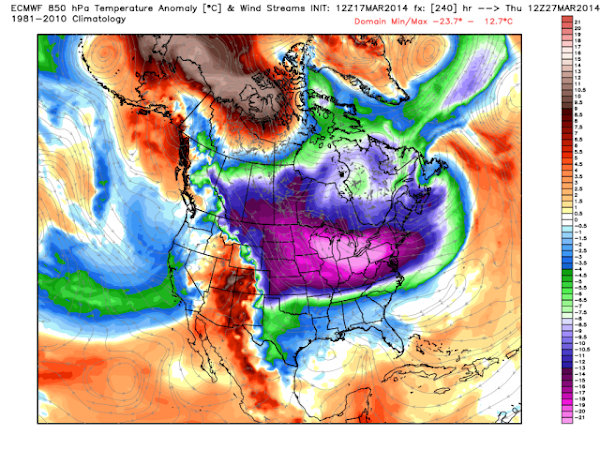 I've done a lot of reading and research over the years on "global warming", "climate change", or whatever it is they're calling it these days.

It's a scam, plain and simple. It's a conspiracy by the United Nations (in the form of its highly conflicted IPCC panel) to control huge swaths of the world economy. I liken it to the U.N.'s criminal "Oil for Food" program, only on a much grander scale.

As far as I can tell, the people promoting this fraud are either Marxist radicals, deluded drones, or scientists looking for government handouts.

And if I ever see Al Gore on the street...

The case against "global warming" is absolutely ironclad. The whole thing rests on an attempt to obscure what science really is and how it functions. But you won't hear any of that on TV.