I have a dream.

I have a dream that someday, somehow, a real media will emerge and replace what is now a nakedly partisan propaganda wing of the Democrat Party, which uses brand names like NBC News, The New York Times, The Washington Post, and CNN, to name but a few.

But, until then, we'll have to rely upon foreign media outlets to confirm what we all know to be the truth. 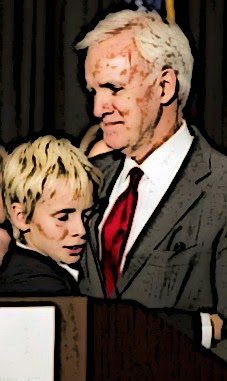 ...Obama, he said Wednesday in his Manhattan office, knew full well he was lying when he promised that the Affordable Care Act would allow Americans to keep insurance plans they liked... 'He had to know he was misleading the audience,' Kerrey said quietly, recalling the newly minted president's countless promises as Congress and the public debated his signature health insurance overhaul...

...Obama compounded his rhetorical mistakes with political ones, he said, by agreeing to ditch a proposal allowing Americans to buy into the Medicare system the way they would buy a policy from a private insurer...

'We're robbing from the future to pay for the past,' he told MailOnline on Wednesday. 'We just are... And we're shoveling more and more money to people over the age of 65.'

The result, he said, is a set of financial chains clamped tightly on future generations.

Is Barack Obama that president? Kerrey stayed silent but shook his head... 'I'm shaking my head "no,"' he acknowledged, finally.

...Another of Obama's failings, according to Kerrey, is an inflated sense of Americans' appetite for programs to correct what the White House calls 'income inequality,' through new taxes and other income-shifting initiatives that transfer wealth from the rich to the poor... The president's re-election 17 months ago wasn't a mandate to conduct class warfare, he said.

...Obama isn't the first president to make that kind of miscalculation – Kerrey calls it 'self-delusion' – while in office... Bill Clinton [was] an unusually good liar. Unusually good,' the Nebraskan said in 1994.

He told MailOnline that he 'actually intended it as a compliment,' although Clinton 'didn't take it that way.'

Obama's lies, he said, stem from the same human flaw... 'That self-delusion moment comes in a single declaratory sentence,' Kerrey said, which is, "If they just get to know me, they'll vote for me" ... 'It's just self-delusion. ... Some of us are good at it, and some of us are bad.'

You know, it's the strangest thing.

I just did a quick news search for Bob Kerrey's statements in U.S. media. Can you guess what I found?

Which, coincidentally, is how much real Americans should rely upon vintage media.

If as a kid you screw up it follows you online forever.
If it's not online, (or in the Frontier database) it never happened. "I'm not calling you a liar sir, but...".

Oh, the kettle and the pot? Wow. But I love when they eat their own. They are cannibalistic by nature. It offers sweet entertainment.