SOUNDING THE ALARM: Obama doing to the U.S. military what no enemy on Earth could do

I began March with a look at the way President Obama is undermining the U.S. military and did not think I would have to return to this topic for a while. I was wrong. 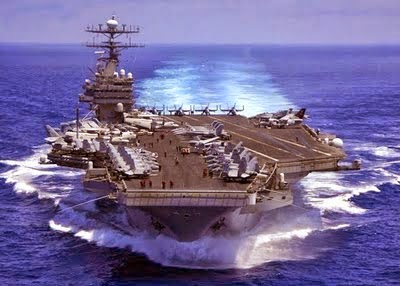 A March 25 article in The Washington Times was titled “Obama to Kill Navy’s Tomahawk, Hellfire Missile Programs in Budget Decimation” and on March 21, The Wall Street Journal published a commentary, “America’s Incredible Shrinking Navy.” When you add those to The New York Times February 23 article, “Pentagon Plans to Shrink Army to Pre-World War II Level”, you’ve got sufficient reason to begin to realize something very ominous is occurring.
This concern is heightened by the way dozens of high ranking officers are, in the view of some observers, being purged. A number of retired generals are speaking out about it. One of them, retired Army Major General Paul Vallely has charged that Obama is “intentionally weakening and gutting our military and reducing us as a superpower, and anyone in the ranks who disagrees or speaks out is being purged.” Retired Army Major General Patrick Brady agrees saying, “There is no doubt he is intent on emasculating the military and will fire anyone who disagrees with him.”
The world, over the course of human civilization, has always been a dangerous place. Much of the history of mankind is a history of wars, large and small. In the last century the U.S. military was involved in two world wars, a Korean conflict, a war in Vietnam, and the Gulf War to drive out Hussein’s Iraqi forces after he invaded Kuwait.
The Russian seizure of Crimea in the wake of the protests that has left Ukraine in disarray has put all of Europe on edge and raised questions about the readiness of NATO. A look around the world sees China increasing its military strength, particularly at sea.
The Middle East to include much of northern Africa is a hotbed of turmoil. And, of course, Iran continues to contribute to it, aiding Syria’s regime along with the Russians, supporting Palestinian terror organizations that threaten Israel, while pursuing its own nuclear weapon capabilities.
This would hardly seem a good time to undermine U.S. military capabilities, but that is exactly what is occurring thanks to President Obama.
The Washington Times reported that “President Barack Obama is seeking to abolish two highly successful missile programs that experts say have helped the U.S. Navy maintain military superiority for the past several decades.” The Tomahawk missile program, under Obama’s 2015 budget proposal, would be completely eliminated by fiscal year 2016. Seth Cropsey, the director of the Hudson Institute’s Center for American Seapower, said “This really moves the U.S. away from a position of influence and military dominance.”
Writing in The New York Times, Steve Cohen, a former director of the U.S. Naval Institute, noted that “The Navy is supposed to be ‘forward deployed’ to provide the president with tools powerful enough to deal with potential threats and trouble spots.” For decades since the end of World War Two the U.S Navy has patrolled the world’s sea lanes to protect trade between nations, but Cohen said, “The rest of the world isn’t unpatrolled, but it is under-patrolled” noting that “Some 90% of the world’s trade moves by sea. Much of that can be disrupted by attacks on a handful of choke points readily apparent to pirates, terrorists, and rogue nations.”
“With the U.S Navy arguably at its smallest since 1917, we don’t have many ships that are actually at sea. Only 35% of the Navy’s entire fleet is deployed, fewer than 100 ships.”
U.S. air power has been under assault as well by the Obama regime. In June of last year, David A. Deptula, a retired Air Force three-star general and senior military scholar at the Air Force Academy, warned that “In the Air Force alone, more than 30 squadrons are now grounded, along with aircrews, and maintenance and training personnel.” Less than a year ago “The graduate schools for Air Force, Navy and Marine combat aviators” had been cancelled. “Equipment testing and upgrades to F-22s, F-15s, F-16s, and other aircraft have been delayed.”
In September 2013, the commandant of the Marine Corps, James F. Amos, warned that cuts to the nation’s defense and security spending that occurred from 1990 to 2001, reduced its total active-duty strength by 32%. In 2001 the Corps totaled approximately 172,000 Marines, down from 197,000 in the 1990 Gulf War. When 9/11 occurred, the Marines “found themselves short of critical capabilities in intelligence collection and analysis, in communication and in mobility on land, sea and in the air.” These days the Marines are facing further reductions.
It will be up to Congress to eliminate the sequestration cuts and the Obama regime proposals to ensure that the U.S. military is restored to a state of readiness. If it rubber stamps the reductions that have been occurring for more than a decade, the ability of the nation to respond to an attack on our homeland or any of our allies will be highly limited.
You can be sure that those nations unfriendly to our future are fully aware of this and the defeat of our armed forces could occur on the battlefield because it has already occurred here.

This is unacceptable. Something needs to be done about Obama.

Mark this: our beloved country will be invaded from abroad, and our cities will burn. (Heck, we already are being invaded on our southern border.) Obama is to blame, the tyrant, and all his cronies and sycophants.

As much as I understand the need for a sufficient military, the sad truth is that the country is creating both money and debt like there is no tomorrow. We must live within our means. With a GDP around $17 trillion, but a net government obligation in the form of Social Security, Medicare, etc. is north of $100 trillion. Economic reality will impose its fiscal discipline if Congress won't, and the military will not be immune from cuts. Other nations will rush to fill the power vacuum the US budget cuts must surely impose on all branches of government.

Valerie Jarrett and her monkey are right on track.

Elect a boy-communist president, and: surprise!

As much as I understand the need for a sufficient military, the sad truth is that the country is creating both money and debt like there is no tomorrow. We must live within our means. With a GDP around $17 trillion, but a net government obligation in the form of Social Security, Medicare, etc. is north of $100 trillion. Economic reality will impose its fiscal discipline if Congress won't, and the military will not be immune from cuts. Other nations will rush to fill the power vacuum the US budget cuts must surely impose on all branches of government. the BuckWheat"

What an idiotic and self serving comment. "Other nations" will only rush to fill the vacuum of what can be grabbed, as Putin is now.
Defense of the nation, it's security, the safety of it's citizens at home and abroad, is an imperative. Providing free room and board for millions of useless parasites is not.
From the moment that our economy was deliberately crashed to elect Barak Obama this country has been under attack by domestic enemies.
Billions for defense, not one cent for such a meaningless concept as "social justice".

I have been doing stories of what this administration has been doing to our military. From losing benefits, women's hats for men, Extortion 17, regulations for Christians, purging top brass, Oh how I could go on and on, but you know them all.

Your article is the best article I have read on the latest topic of the military. I am sending people to your site on my show on Sunday. A must read for my listeners.

The issues here is if it, military, offends Nobams or the high priestest Valery Jarrett then your carrear in the military is over.... We MUST eliminate Nobama & Jarrett; then the Army can rebuilt and become the powerhouse it once was....nothing will change until Jarrett is in jail where she belongs.... She is the string puller for George Soros......

Did you know this is the first year the Navy will not be teaching navigation by the stars to anyone? They have gone high tech and will rely on computers.

How much have we spent in the last several years for the Obama family to go on vacation and how many golf trips, the cost of jet fuel, the pay for the Air Crews, that the Air Force will have to absorb, and oh yeah how about the cost of security for the first family. Do you ever rember reading in our "so called unbiased free press" about any other world leader and their family doing as much damage to their countries economy? As a retired military veteran it is very SAD to see the NATION that I spent ONE HALF of my life defending and helping to stay the GREATEST NATION on Earth be destroyed from withinby the ppeople that we were STUPID enough to elect. How many other Nations have been destroyed from within in the past? It almost makes me sad to think that I missed out on so many important events in my families lives defending our way of life that so many others have given so much to give us.

This bears watching, but I am not alarmed yet only because Obama has been using drones far more than Bush did. Drones are increasingly the weapon of choice in the military because they can fly under the radar and be on an enemy's doorstep before the enemy even knows it was coming.

You don't actually believe that OBAMA himself could accomplish all of this on his own?

Stop looking for the one Dark Sith and look for what might be a more entrenched problem...one that has been around well before Obama or even Bush took office.