Misunderstanderers of Islam call for car bombs in U.S. cities

Last week, Al Qaeda in the Arabian Peninsula (AQAP) released the 12th issue of their Inspire e-magazine. This issue, the first since last year’s release of Issue 11 (30 May 2013), continues AQAP’s calls for attacks on the West, individual jihad, and the lionization of the Tsarnaev brothers. Local attacks are encouraged with considerable focus on the Commercial Facilities Sector, and sporting events in particular. It also identifies high-priority targets in the US, UK and France. 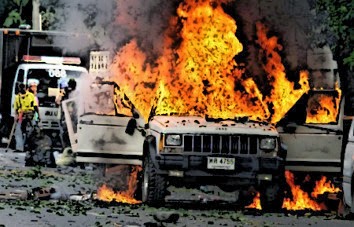 A section entitled “Open Source Jihad” asserts it is a “resource manual for those who loathe the tyrants; includes bomb-making techniques, security measures, guerrilla tactics, weapons training and all other jihad related activities.” As with previous messages, the section continues to encourage jihadists to conduct local operations as opposed to assuming risk via overseas travel.

The section on "Car Bombs Inside America" states, “Inspire Magazine's goal is to empower Muslim youth. And what is empowerment without being strong, powerful and intelligent? In this section, we give you strength, power and intelligence. Believe me, using car bombs gives you all that. It is absolutely simple. And we will make it simpler for you, biidhnillāh (meaning: by Allah’s [God’s] will), so that every Muslim, who loves Allāh and His Messenger, and wants to accelerate Islam's victory, becomes prepare to make, even if this is the first military mate- rial his eyes has set on. This recipe gives you the ability to make a car bomb even in countries with tight security and surveillance. The reason is: primary materials easily available and they do not raise suspicion. These materials are not explosives in nature. But after you have assemble and prepare them, they become a bomb ready for destruction, biidhnillāh. This type of car bomb is not usually used to destroy buildings, but is very effective in killing individuals. The merit of this method is that you can prepare a car bomb in a few hours during the availability of the primary materials. So there is less worry about your personal security.”

A section captioned “Car Bomb Field Data” states, "Choosing the place and time is a crucial factor to success in any operation. Choose targets in your own country. You know the enemy better, you are within. We will point out some general and specific targets as an example.” Identifying “general targets,” the segment continues, “America is our first target, followed by United Kingdom, France and other crusader countries. As for the field target for the car-bomb, you have places flooded with individuals, e.g. sports events in which tens of thousands attend, election campaigns, festivals and other gathering. The important thing is that you target people and not buildings.” The section then lists specific target areas within the US, UK and France. 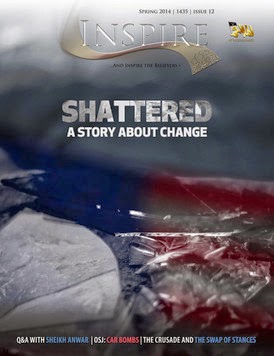 Specific targets and time periods to attack identified: "Areas and Restaurants with high profile personalities - Usually these people visit the restaurants during the weekend: (in Virginia) Arlington; Alexandria; Restaurants and Bars in the M street, Washington (DC); Tennis stadiums; they are visited by thousands of people, and high profile people, especially the US Open (25 Aug – 08 Sep).” Noting times of attacks, they continue, stating specific times include, "During the election seasons, both presidential and Congress (and) During Christmas and New Year's Eve, 25th and 31st December."

Inspire also identifies High Priority Targets in the UK and France listing a variety of potential targets with a focus on sporting events. (UK) "You have the soccer (football) stadiums especially during Premier League and FA Cup matches. They have worldwide life media coverage. The best time is after the final whistle, when huge crowds leave the stadium and celebrate around the entrances; In the beginning of summer, we have Cheltenham, and the end of summer we have Epsom, whereby horse races are attended by thousands from around the kingdom including the Queen; There are also Tennis tournaments; It is worth to mention a more specific target, Savoy Hotel located on the Strand in central London. At about 10 pm GMT, businessmen and high profile targets leave the hotel. This is a perfect place and time to detonate your car bomb.” (France) "With over 82 million foreign tourists per annum, France is ranked as the first tourist destination in the world, beaches and seaside resorts, ski resorts, and rural regions that many enjoy for their beauty and tranquility (green tourism); The Transport express régional (TER)'s stations. Rush hours will always do; The Dordogne valley, during summers. Hit two birds with one stone; both the English and the French; The Coupe de la Ligue; only open to professional clubs. Expect huge crowds of supporters outside the entrances; The Bastille Day Military Parade: the morning of 14th July each year in Paris; During special exhibition in the Musée du Louvre: the most visited art museum in the world and a historic monument; The French Riviera."