Sleight of hand and illusion have their role in the entertainment world; but when the same tactics are employed in the real world, the stakes are much greater, and the intent more dubious. David Copperfield has met his match in fabricated magic and illusionary tactics. For as any illusionist knows, in order to avoid letting the spectator see what’s really going on, you distract the spectator’s attention. And none are better at that than those leading the country today. 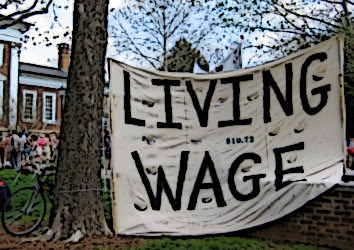 With the spectacular flop of the Unaffordable Care Act rollout, the moribund economy, disappointing jobs growth, dramatic widening of the income gap, higher poverty rates than the country has seen in 50 years, and an impotence with world leaders on the global scene, the Magician In Chief reached for his magician’s hat. And what did he pull out in an attempt to distract the nation from his colossal failures? A minimum wage increase! Voila! And now on cue, let us all be impressed! On second thought, let’s not be.

Let’s look at the data from the Bureau of Labor Statistics (BLS) on who is affected by the minimum wage. According to the BLS, 3.6 million of our total civilian workforce of 155 million workers are at or below the minimum wage compensation level. That is 2.5% of all workers in the U.S. Comprising that group of minimum wage earners, 31% are teenagers, and 55% are 25 years old or younger. That means that just slightly more than 1% of the total workforce over the age of 25 is earning minimum wage.

Even that 1% over the age of 25 earning minimum wage are not typically the primary breadwinner of an American family. According to BLS data, 63% of workers who earn less than $9.50 per hour (remember, the minimum wage is $7.25) are the second or third earner within their household. And nearly half of those live in households with earnings over $50,000 per year. So not only is the group very small that’s affected by the minimum wage, but the data don’t support the notion that they’re the “working poor.”

This segment of the population has been shrinking over the past thirty years. In 1980, nearly 15% of hourly workers were compensated at the minimum wage level. Considering how moribund the economy has been the past few years, it’s nothing short of remarkable that the total percentage of the workforce now paid at that level is a scant 2.5%.

The Congressional Budget Office (CBO) estimates that raising the minimum wage from $7.25 to $10.10 per hour will lift approximately 900,000 people out of poverty. And it will take a few years to do it. But according to the BLS, there are 50 million Americans living in poverty, as defined by the government. That’s less than 2% of those living in poverty that will be elevated beyond that classification. The rest of those in poverty are in the custody of the state. Perhaps they just need a good job.

But the CBO also estimates that there will be a loss of half a million jobs by raising the minimum wage. Keep in mind that their estimates are always lower than reality. Current Federal Reserve Chairman Janet Yellen affirmed the economics behind the CBO projections. “I think almost all economists think that the minimum wage has two main effects,” Yellen said. “One is to boost pay for low-wage workers and the second is that there would be negative impact on employment.” Considering the realities of laws of economics, if we wanted to see more job creation, perhaps the minimum wage should be lowered, especially since most of those who work at that level are (according to BLS data) young people, and not primary wage earners for a household.

For those who venerate peer-reviewed research, here’s an economic feast of data. Joseph J. Sabia and Richard V. Burkhauser in a research piece a few years ago stated, “While reducing poverty among the working poor is a laudable policy goal, the evidence suggests that minimum wage increases have thus far provided little more than symbolic support to this population.”

“Several explanations have been offered for this finding. Card and Krueger (1995) emphasize that minimum wages fail to reduce poverty because many poor Americans do not work. Others have argued that even among the working poor, the relationship between earning a low hourly wage rate and living in poverty is weak and has become weaker over time (Stigler 1946; Burkhauser, Couch, and Glenn 1996; Burkhauser and Sabia 2007).”

Unions are fully supportive of an increase in the minimum wage, but it’s not out of solidarity or altruism for the low-income earner. It’s because they benefit directly. The Center for Union Facts indicates that many unions tie their base-line wages to the minimum wage, which means as it goes up, their coffers benefit.

There is another inconvenient truth that the advocates of raising the minimum wage need to address. Our de facto open border policy has depressed wages. Approximately a million low-skilled workers illegally come into the country every year, driving down wages, especially at the lower end of the spectrum. Harvard economist George Borjas has documented how our immigration policies have reduced American wages by $402 billion a year, while increasing profits for employers by $437 billion a year.

Once the actual BLS data are examined, and the laws of economics applied, there is little objective reason to increase the minimum wage. The only reason is political. And in an election year, nothing plays better to the uninformed masses than a populist message, especially when it diverts attention so conveniently away from so many other problems created or exacerbated by the administration’s policies.

I've had similar discussions to leftists and they are entirely impervious to facts. They point out the one or two outliers with higher than average minimum wages with lwer than average unemployment. Instead of looking that economic exceptions that allow this to happen, they say that this proves you should raise the minimum wage to decrease unemployment. It's the same twisted logic that says the pile of ash creates the burning cigarette. It's nonsensical. And stupid. And at odds not only with economic theory but all historical data. I've named this type of delusion Unicorn Economics, for those who believe that 2 + 2 = 5 because unicorns.