OH, NOES: Thanks to global warming, the Commonwealth of Kentucky will be beachfront property

I meant that Kentucky was beachfront property... just 100 million years ago.

During the Cretaceous, 139-65 million years ago, shallow seas covered much of the southern United States. These tropical waters were productive–giving rise to tiny marine plankton with carbonate skeletons which overtime accumulated into massive chalk formations. The chalk, both alkaline and porous, lead to fertile and well-drained soils in a band, mirroring that ancient coastline and stretching across the now much drier South... 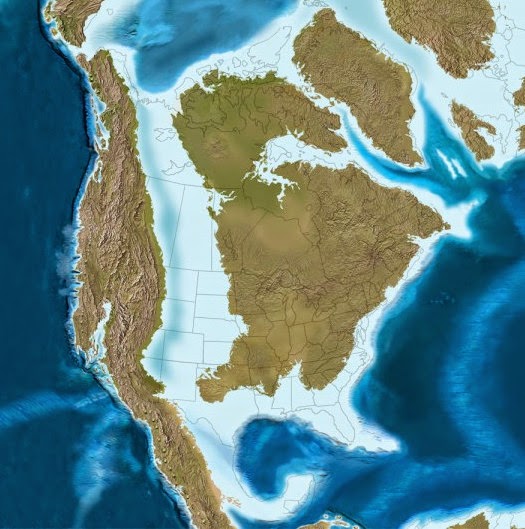 I'm so confused. If the "human virus" has damaged the planet so badly, why would the sea be returning to the levels of pre-human days?

That is, if sea levels really are rising. Which, of course, they are not.

So, the original "Northwest passage" was from Houston to Alberta??

Please note that there's a lot more going on here than just a rise in the sea level. The deepest water in that western passage runs right up the continental divide in New Mexico and Colorado on up through the Canadian Rockies - we're talking high Rocky Mountains, much of the range from 1 to 2 miles above sea level. Yes, the area was covered in shallow seas millions of years ago. But the water didn't retreat much - the land was pushed up.