EXPORTING GAS TO EUROPE WOULD BE A HUGE VICTORY FOR THE WEST: Which explains why Obama won't do it

Geopolitics: Four central European nations have appealed to the U.S. to increase natural gas exports should Russia cut off its supply to Ukraine. We are the superpower of energy. Time to give Vladimir Putin some gas pains. 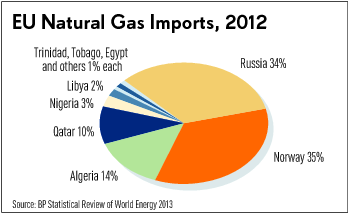 Hungary, Poland, Slovakia and the Czech Republic sent a letter Friday to House Speaker John Boehner, with a similar letter expected to be sent to Senate Majority Leader Harry Reid, asking the U.S. to expedite approval of natural-gas export applications. These nations believe a steady gas supply is key to the region's economic and geopolitical stability.

Putin's Russia has used its energy resources as a weapon, and the current crisis in Ukraine and Crimea is no exception. Most of the pipelines taking natural gas from Russia to a dependent Europe run though Ukraine, a fact not lost on fearful Europeans as the Russian bear growls anew.

President Obama says there will be "costs" for Russia's seizure of Crimea, so it's time the administration remembered that a crisis is a terrible thing to waste. This is a perfect opportunity to increase our exports, as Obama has pledged to do, and thwart in a non-military way Russia's increasingly expansionist ambitions.

"The presence of U.S. natural gas would be much welcome in Central and Eastern Europe," ambassadors from the four countries wrote to Boehner. "And congressional action to expedite (liquefied natural gas) exports to America's allies would come at a critically important time for the region."

Ukraine is dependent on Moscow for more than two-thirds of its natural gas, and Russia has been raising prices steeply. In 2012, Russia provided about 34% of the European Union's natural-gas imports, second only to Norway, according to the Congressional Research Service.

Ukraine's new government currently owes $1.89 billion to Russia for natural gas, and it might have been threats from Moscow to cut off that supply that led now-deposed Ukraine President Viktor Yanukovych to abandon a scheduled trade deal with the European Union.

Of the more than 20 applications that companies have submitted to export natural gas, the Department of Energy has approved six. We suspect this is due in large part to the Obama administration's ideological opposition to fossil fuels. Witness the Kabuki dance the administration is doing on approval of the job-creating Keystone XL pipeline from Canada.

Exporting natural gas — the cleanest-burning of fossil fuels — from an abundance generated by private industry using the privately developed technology known as fracking is not favored by an administration that tilts at bird-slicing windmills and bird-frying solar panels as it tries to force us into electric cars.

Putin recognized the threat of the American fracking revolution to Russian power when he recently told Russia's Duma that fracking will "seriously" shape the global energy market — and not necessarily to his, or Russia's, advantage. "National energy companies, obviously, must respond to these challenges," he warned.

Russian energy giant Gazprom has long had a near-stranglehold on supplies to Western and Eastern Europe, drawing on Russia's massive energy reserves and lengthy pipelines to supply the bulk of gas to 30 countries, including most of the EU.

The fracking revolution, according to Thane Gustafson of Georgetown University, one of the world's top experts on Russian energy, undermines Moscow's economic and foreign policy goals. "The Russians are going to find themselves in the position of global gas price-takers," he says. "Their capacity to influence the market there is going to diminish."

As will their economy, their military power and their capacity for belligerence abroad. If the administration wants to stop Putin without military intervention, it needs to get on board with more fracking and get behind increased exports.

Barack Obama is a traitor.
Expect him to act like one.