Politics: Harry Reid blames Russia's annexation of Crimea on Republicans who didn't act fast enough on a sanctions package. But he ignores Obama's appeasement as president and push when a senator to disarm Ukraine. 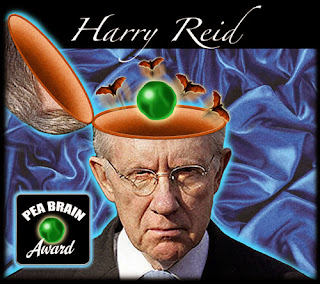 The Senate Majority Leader's latest claim is consistent with other utterances out of his parallel universe, including calling Stage IV cancer patients liars about Obamacare's collateral damage and asking why we'd want to save one child with cancer.

"Since a few Republicans blocked these important sanctions, Russian lawmakers voted to annex Crimea, and Russian forces have taken over Ukrainian military bases," Harry Reid said Monday as the Senate began debate on a package of sanctions and aid.

"It's impossible to know whether events would have unfolded differently if the United States had responded to Russian aggression with a strong, unified voice."

The man who makes Vice President Joe Biden look competent by comparison ignores the fact that since the House and Senate passed different versions, quick action on sanctions would have been impossible and that it was Reid and the Democrats who refused to bring up the House version as is.

The Senate version wasn't a clean bill, having attached provisions that would increase the power of emerging countries in the International Monetary Fund and shift some $63 billion from a crisis fund to a general account that Republicans feared would leave U.S. taxpayers on the hook for more foreign bailouts.

Yet Reid directed blame to Republicans who had reservations about this Christmas tree, saying their delay of congressional action "sent a dangerous message to Russian leaders."

We doubt that former KGB Col. Vladimir Putin, who considers the demise of the Soviet Union one of history's great tragedies, cared much about Reid's idea of sanctions.

Obama's record of appeasement as both senator and president is all the encouragement that Vlad, the impaler of nations, needed. An American president who betrayed Poland and the Czech Republic on missile defense and vacillated on the Russian invasion of Georgia as senator lost Moscow's respect long ago.

From Obama's infinite number of red lines on Syria to his gutting of the U.S. military, Putin saw a weak, out-of-his-depth former community organizer who bowed to world leaders as he apologized for American excess. Obama would go on to cave to pressure and promise Russia's leaders that he'd have even more "flexibility" to bend to their will after he was re-elected.

Putin no doubt remembers how in 2005 then-Sen. Obama pushed for the destruction of large amounts of conventional ammunition and weaponry for the Ukrainian military, based on vague assurances that the Cold War was over and the U.S. would provide a security guarantee.

As the Daily Mail reports: In August 2005, just seven months after his swearing-in, Obama traveled to Donetsk in eastern Ukraine with then-Indiana Republican Sen. Dick Lugar and toured a conventional weapons site. Meeting in Kiev with President Victor Yushchenko, they made the case that weapon stockpiles inherited from the old Soviet Union should be destroyed.

Sen. Obama pushed for eliminating 400,000 small arms, 1,000 anti-aircraft missiles and more than 15,000 tons of ammunition. "We need to eliminate these stockpiles for the safety of the Ukrainian people and people around \ world by keeping them out of conflicts around the world," Obama said in an Aug. 30, 2005, statement from Donetsk.

So how safe are the Ukrainian people now, Mr. President? And any further comment from you, Sen. Reid?

Reid is sick, but not necessarily delusional. Reid's statement was for consumption of -- and belief by -- the most ignorant of the left's useful idiots.

The only surprise about his statement is that Crazy Pelosi or Dumbbell Michelle wasn't trotted out to say it first.