Of course, none of this outrageous behavior will stop the unions and corporatists who are bound and determined to destroy the United States of America. Breitbart's Matthew Boyle reports:

Fully 98 percent of individuals deported from the United States in 2013 were either criminals, apprehended while illegally crossing the border, or had been previously deported, according to a new analysis from Senate Budget Committee ranking member Sen. Jeff Sessions (R-AL)... “The evidence reveals that the Administration has carried out a dramatic nullification of federal law,” Sessions said... 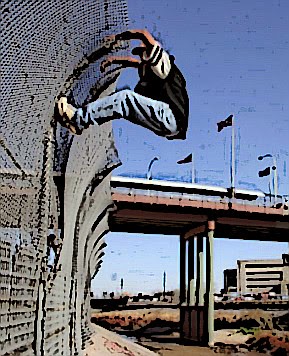 ...Only 0.2 percent of an estimated 12 million illegal aliens in the U.S. who were actually placed into removal proceedings in 2013 in 2013 did not have a violent or otherwise serious criminal conviction on their record. Only .08 percent of the total number of illegal aliens placed into removal proceedings were neither repeat or serial immigration law violators nor convicted of a serious crime. Even with that .08 percent of removals who were not caught crossing the border or being a serial immigration law violator or being convicted of serious crimes, Sessions’ staff notes that ICE officers who communicate with his office say that there is likely some other serious security risk for allowing them to stay in the country that is cause for their removal.

The findings stand in stark contrast to liberal calls on Obama to reduce deportations. Top Hispanic Democrats recently met with Obama at the White House recently about the issue, prompting an announcement about a review at the Department of Homeland Security about how to deport illegal aliens in a more “humane” fashion.

The report was enough to prompt a chorus of outrage from Sessions' like-minded colleagues in the House, who slammed the Obama administration for enacting amnesty by fiat.

“This is another clear warning to anyone who thinks immigration reform is possible under President Obama,” said Rep. John Fleming (R-LA). “He has repeatedly shown a willingness to enforce the law selectively, while looking the other way when it doesn't fit his agenda.”

As Sen. Sessions observes, "The Administration’s actions are breathtaking and without precedent. American citizens have both a legal and moral right to the protection our immigration laws afford; those rights have been systematically ignored, resulting in a massive loss of income and wages for the most vulnerable Americans. The Administration has abandoned its duty to faithfully execute the law and protect U.S. sovereignty, resulting not only in a collapse of immigration enforcement but a grave jeopardy to the American system of law and justice itself."

This is truly criminal behavior on the part of this president, his party, and this administration. Remember in November.