Hollywood's most useful idiot celebrates yet another success story of Statism (without redistribution of his own cash, of course):

As for what's really happening in Penn's "Utopia"? Fausta translates for us:

This in NOT a demonstration, this is a line to buy food in Venezuela. The result of 15 years of Chavismo. 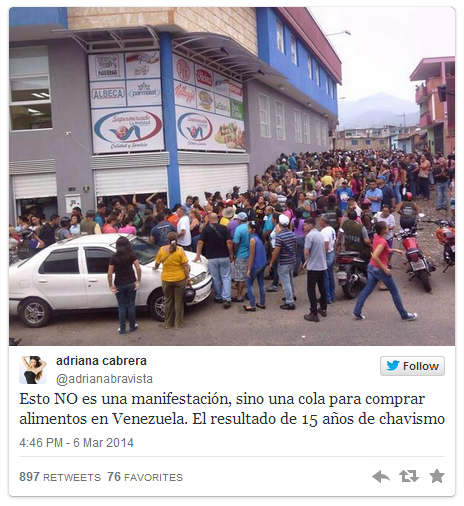 Venezuelans waiting in line for gas in a country loaded with gas/oil. Absent from photo: Sean Penn pic.twitter.com/G7Id37fjQT

How sick, ignorant or -- yes, I said it -- evil do you have to be to support the radical left's agenda of centralized government, price/wage controls, and totalitarianism?

That's a rhetorical question. I've concluded that the leaders of today's Democrat Party are both ignorant and evil.

Socialism is destructive and creates shortages and poverty. Remember Carter's gas lines around the block?

Obama wants the US to have the same kind of food lines that Venezuela has. And, he wants his sons/Holder's people in control of giving gas and food to their cronies only. Whites and Conservatives to the back of the line...no bread and no fuel fo yo.

Obama has used every power to destroy, to divide and defraud the USA and to punish all dissent and disagreement with his agenda.

Sean lives in mansions, stays at the finest hotels, rides around in cool rides, and he wants to tell the rest of us to live like commies. Why isn't he down in Venezuela hanging with Maduro?

Remember the days when my Commie Obama hats were considered 'extreme?'