DELUSIONAL NANCY PELOSI: Obamacare will be a "political winner" for Democrats in 2014 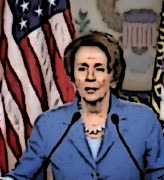 Another day means another poll that is sure to give the President and some members of Congress heartburn. According to a new poll by the Pew Research Center, opposition to the President’s signature legislative achievement remains high. The survey, as reported by The Hill, found that 53 percent disapprove of Obamacare, compared with 41 percent who approve.

Given such opposition, one would think twice about describing the law as a “political winner,” but that’s exactly how House Minority Leader Nancy Pelosi (D-Calif.) sees it. Her remarks after the jump are illustrative of the vast disconnect between the will of the people and Congress and may help explain why “one in three registered voters in the NBC-WSJ poll said that their vote for Congress this fall will be intended to signal opposition to President Obama.”

Unfortunately, for Pelosi, four years after Congress passed Obamacare to find out what’s in it, the American people are learning that many can’t really keep their health insurance or doctor—and that the promise that health insurance premiums would go down was also off the mark.

Pelosi, however, would rather us not worry about those side effects and instead concern ourselves with calling the law by her preferred name, “the Affordable Care Act,” and not Obamacare, as she was quick to correct an unsuspecting journalist.

Senility, or some really good drugs??

When the left has to communicate stupidiy to its base of useful idiots, they trot out Crazy Nancy Pelosi to say it. (That is, if Michelle Obama is not available.)

Adolph Hitler explained it: "the big lie: to outrageous not to believe."

However, as Barack Obama has become gun salesman of the millenium, Crazy Nancy Pelosi will be the greatest getter of the conservative vote since Ronald Reagan.