The headline says it all: "Tesla Model S To Get Titanium Battery Shield, Plus Deflectors:"

Tesla Motors announced this morning that it will fit three new underbody components to all Model S electric cars to add further protection against impacts from road debris, which caused a pair of fires in its cars last fall.

Those two Model S cars were severely damaged when their battery packs, mounted under the floor, were pierced by road debris and subsequently caught fire. 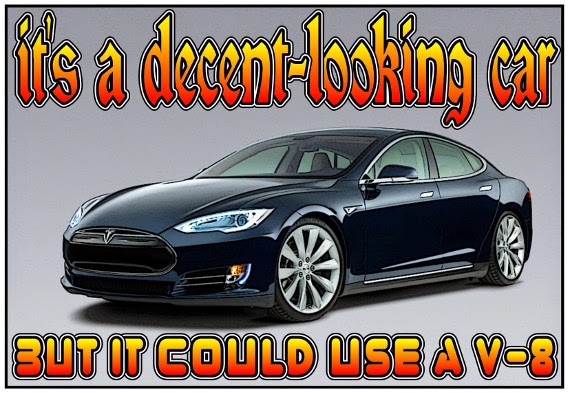 A third Tesla fire occurred in Mexico after a Model S was stolen, run off the road at high speeds, and through a reinforced concrete wall, tearing off wheels and totaling the car.

No one has been injured or killed in any Tesla fire; drivers were able to pull over, park the cars, and walk away following a warning from the cars' monitoring system.

If only scientists could invent a car that would be impervious to road debris. Perhaps, I don't know, maybe using a combustion engine. It's just an idea.

The funniest thing about this electric car fad is -besides the piles of toxic batteries soon to fill the scrapyards- the fact that the internal combustion engine is all but perfected... you can all the power you can even handle, the effeciencies with computer controls is amazing, and they've got em blowing out cleaner air than they suck in. The people who are enthusiastic about electric cars are mostly the people who always hated cars in the past, and largely know nothing about them- especially on the technical end.