You may recall that GM has suffered from a series of embarrassing product defects and recalls including one that the company "didn't fix until 13 people had died."

Patrick George at Jalopnik discovered a GM Powerpoint that illustrates how the automobile manufacturer went so far off the rails related to a whole host of catastrophic product defects.

George calls the presentation a "smoking gun" intended to dissuade employees from candidly discussing safety issues. In fact, one panel goes so far as to request that engineers avoid the use of the words "defect" or "safety" and instead focus on "issue, condition or matter." 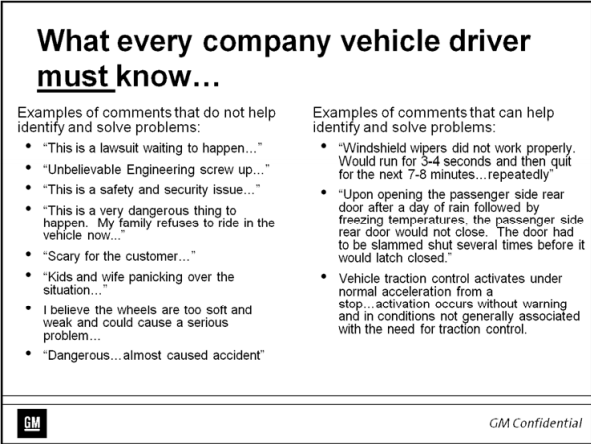 One panel offers a laundry list of words to avoid including "disemboweling", "impaling", "maiming", and "mangling" even if, presumably, victims were in fact disemboweled, impaled, maimed and mangled by said vehicles. 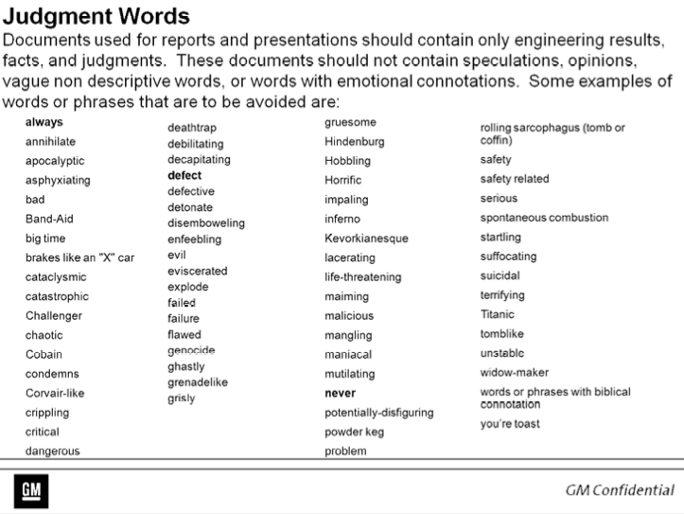 So Toyota committed no such crimes and was forced to pay billions in fines (after laughably being accused by Eric Holder of a "cover up") while GM really does cover up a "death trap" and will pay $35 million?

When I worked at Ford we had a similar directive. We called "anti-lock brakes" "anti-skid brakes" before we were told to stop referring to it with the word "skid" in it as an example.

We at GM would prefer that you not refer to such individuals as
"victims", but rather as
"formerly living customers".