WHEN PROPAGANDA FAILS: The Fall of Mainstream Media

It doesn't happen often, but The New York Times (NYT) has truthfully reported on something recently.

On what did it report? Well, on itself, and how alarmed it is due to its own increasing irrelevance in the face of new sources of information. 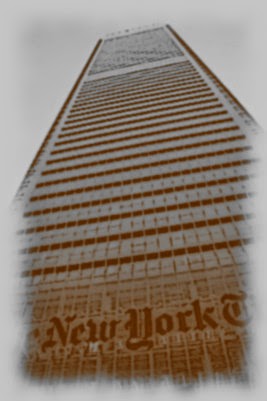 NYT is well-aware of the "New Media," as a 96-page internal report, sent to top executives last month, makes clear. Obtained by Buzzfeed, the report "paints a dark picture of a newsroom struggling more dramatically than is immediately visible to adjust to the digital world, a newsroom that is hampered primarily by its own storied culture."

“They are ahead of us in building impressive support systems for digital journalists, and that gap will grow unless we quickly improve our capabilities,” the report states. “Meanwhile, our journalism advantage is shrinking as more of these upstarts expand their newsrooms.”

“We are not moving with enough urgency,” it says.

A central issue for NYT is “a cadre of editors who remain unfamiliar with the web.”

“Many desks lack editors who even know how to evaluate digital work,” the report continues.

A few suggestions NYT is looking into is a TED talks-style event series and an expanded op-ed platform, including location-based local news and information.

At the very least, thank you, NYT, for stating the truth even though it was an internal document not meant for the public.. And, even if it was already painfully obvious. Still it took bravery for such a dinosaur to admit its own obsolescence.

The paper's model is obsolete, but even worse than the model has been the paper's lack of interest in the truth. As the US empire has grown more out of control, more dangerous, and more insane, the NYT has functioned as a fourth branch of government, a gatekeeper for a totalitarian world a la 1984 or Brave New World. But the gig is up. The world knows NYT's complicity in erecting a sick and deranged world, and unless the paper breaks major news stories and outs itself as an undeniable friend of freedom, it will continue to lose revenue. No more can NYT expect to serve the elite and its bottom line at the same time.  In the age of the internet, what David Rockefeller was once grateful for is no longer possible:

"We are grateful to the Washington Post, the New York Times, Time Magazine and other great publications whose directors have attended our meetings and respected their promises of discretion for almost forty years...It would have been impossible for us to develop our plan for the world if we had been subjected to the lights of publicity during those years. But, the world is more sophisticated and prepared to march towards a world government. The supranational sovereignty of an intellectual elite and world bankers is surely preferable to the national autodetermination practiced in past centuries."

Mainstream media is definitely dying, and this is a VERY good thing. The root of the word government combine as "to control minds."  The root of the word "govern" is control and the root of "ment" is mind.  Without control over minds via the media, the government will lose all control. More young people now get their news from the internet than television. In mere years most everybody will get their news from the internet because nobody will trust the mainstream: 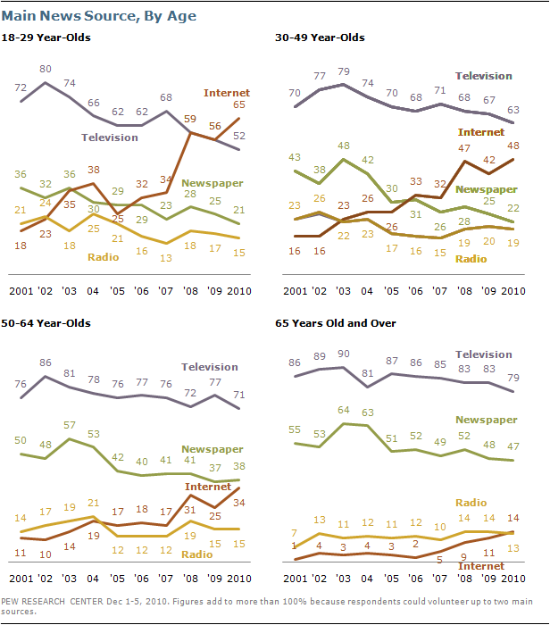 This data shows that it is really only those over 65 years old who are still completely brainwashed.  Not all, of course.  But many or most.  The good news is they will be dying soon along with their interest in voting.

Newsweek (which I call Newspeak) has released its last print issue. You'll remember one of Newsweek's last attempts to be relevant again was uncovering the wrong Satoshi Nakamoto as the creator of bitcoin. They found some guy with the right name in the phone book...You know, "quality journalism"...

Clearly the only valuable part of MSM media sites is in the comments section which debunks 90% of the articles published. Popular Science was so overwhelmed by people bringing facts into many of their articles that the site shut off its comments section.

CNN's viewership is at a record-low (the network recently laid off 40 journalists), while CNBC has suffered a viewership collapse as well... and this with the Dow at all time inflated highs.  Imagine if the stock market were going down how low these numbers would be. 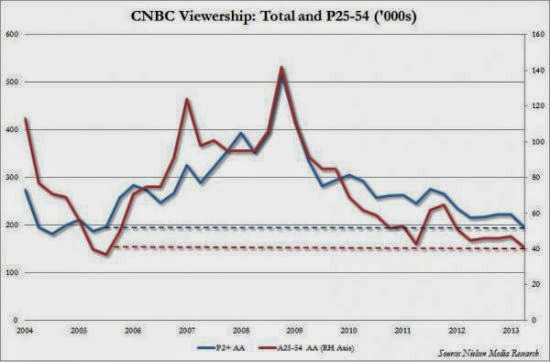 But once Larry King said that CNN would be better off showing re-runs of Spongebob Squarepants 24 hours a day, you knew it was over...

Larry King left CNN because he knew it would collapse. He left CNN for the Russian government propaganda channel, RT, because it is more respected and features more truth about the West. Twenty years ago, this would be have been unheard of for Larry King! A career-ender! Not today...Nope. Today it is a respect-earner. Oh, how things have changed...

The New Media has taken over. Alex Jones is almost a household name and groups like Luke Rudkowski's We Are Change have revolutionized how people get information. (Editor's Note: We Are Change offers "Change Media University" to learn how to become a real investigative journalist that we highly recommend.  Forget traditional school).For years now the most popular MSM personalities, like Glenn Beck, have followed the playbook of new media personalities in a bid to remain relevant. Now, in order to remain relevant people like Glenn Beck need to quote or interview people in the "alternative media".

It was not all that long ago that John Kerry and Zbigniew Brzezinski said that the internet, simply put, is making it hard for them to govern. Secretary of Statism, John Kerry, before a group of State Department workers told the audience that the world has been "complicated" by "... this little thing called the internet and the ability of people everywhere to communicate instantaneously and to have more information coming at them in one day than most people can process in months or a year."

Bill Clinton, laughingly even suggested the need for a "Ministry of Truth" over the internet, run by the US federal government, that would censor anything it did not deem to be "truth".

In 5-10 years people will look at you funny if you tell them you watch mainstream media. Why? Because there is no real information nor substance on mainstream media. If you want to know what's happening in your world, and what's important, then stay tuned to The Dollar Vigilante Blog and The Dollar Vigilante Newsletter where we break down The End Of The Monetary System As We Know It (TEOTMSAWKI) in a manner upon which you can act. More than editorials, the TDV team is determined to augment our reader's lives beyond the capacity of the dinosaur mainstream media.

Anarcho-Capitalist.  Libertarian.  Freedom fighter against mankind’s two biggest enemies, the State and the Central Banks.  Jeff Berwick is the founder of The Dollar Vigilante, CEO of TDV Media & Services and host of the popular video podcast, Anarchast.  Jeff is a prominent speaker at many of the world’s freedom, investment and gold conferences as well as regularly in the media including CNBC, CNN and Fox Business.

It matters little where the news comes from if you don't trust the source. what's to say the on-line press is going to any more truthful or honest than the dead tree press?

Maybe the missus's crazy ramblings about the new world order are slightly more interesting than I thought given that Rockerfeller quote.

Interesting to compare your article to the debacle this side of the pond where the mainstream print media have blown their credibility by ganging up on a relatively new Libertarian party. UKIP is set to win an election against the established parties for the first time despite a firestorm of hate and vilification orchestrated at every level of government. They went as far as taking a couple's children away because they were members of a political party way to the left of your own Democrats.

Whilst there is not enough popcorn in the universe to serve my craving whilst watching media luvvies descend into ranting freaks I do feel there could be some unfortunate and unintended consequences.

I think he means "makes it much harder to herd the people in the direction we want by feeding them only the information we want them to have."