Remember these "blasts from the past"?

Once again, an independent watchdog group has uncovered evidence of criminal activity on the part of the Obama administration. Not John Boehner's bumbling, overlapping committees that are supposed to provide Executive Branch oversight. An independent group.

Judicial Watch today released a new batch of Internal Revenue Service (IRS) documents revealing that its handling of Tea Party applications was directed out of the agency’s headquarters in Washington, DC. The documents also show extensive pressure on the IRS by Senator Carl Levin (D-MI) to shut down conservative-leaning tax-exempt organizations. The IRS’ emails by Lois Lerner detail her misleading explanations to investigators about the targeting of Tea Party organizations. 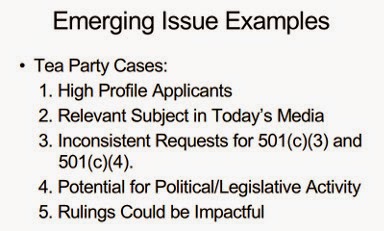 ...Another email string from February – March 2010 includes a message from a California EO Determinations manager discussing a Tea Party application “currently being held in the Screening group.” The manager urges, “Please let ‘Washington’ know about this potentially embarrassing political case involving a ‘Tea Party’ organization. Recent media attention to this type of organization indicates to me that this is a ‘high profile’ case..."

...[In addition,] correspondence to internal IRS investigators from [Lois] Lerner, dated April 2, 2013, ... tries to explain the “Be on the Lookout” (BOLO) criteria used to select organizations for screening and scrutiny...

...The IRS documents also include a presentation entitled “Heightened Awareness Issues” with a red and orange “Alert” symbol identifying the “emerging issues” that trigger scrutiny for organizations seeking tax-exempt status. Page six of the presentation focuses on the Tea Party organizations [at right]...

Now consider the kind of groups that Lerner specifically called out for scrutiny:

1. "Tea Party"
2. "Patriots"
3. "9/12 Project"
4. "Issues including government spending, government debt and taxes"
5. "Educating the public through advocacy/legislative activities to make America a better place to live"
6. "Critical of the how the country is being run"

This administration is completely out of control. Worse, we have a Republican leadership group that is as useless as the G in Lasagna.

Consider that the prior bombshell, the White House talking points email on Benghazi, Judicial Watch was able to uncover more information on the IRS than was provided to any of Boehner's Congressional committees.

John Boehner needs to name a Select Committee on the IRS Scandal.

The fact that Judical Watch was once again to secure documents that Boehner's handpicked committees were not speaks volumes about the Speaker's failed leadership.

Boehner's lack of enthusiasm, in my opinion, is due to a fear of the Internal Revenue Service. If he's like too many politicians, he has a reason to be afraid.

boehner part of the washington ruling class elites who look down on middle class American as stupid rubes
These elites push agendas for their profit like illegals amnesty which lower wages for middle class
Time to rid washington of these parasites who don't care about Americans outside of washington D.C.

And all of this will be met with a collective "yawn" by the voters. They know government is corrupt but they're too busy trying to survive to care.