IF WE CAN JUST SAVE ONE CHILD: The Smallest Victims of the Ruling Elites' Amnesty Blather

There has been a lot of talk from the Obama administration about having more “humane” immigration policies — but the sad fact is that on President Obama’s watch, one of the most inhumane realities of illegal immigration has skyrocketed. Children are crossing the border – and they’re doing it without their parents. 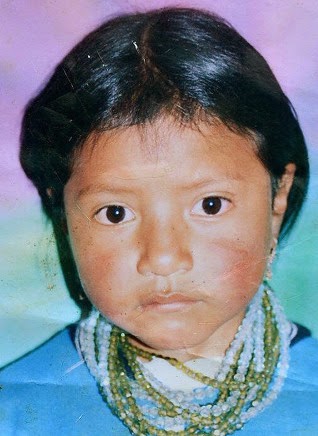 Noemi Álvarez Quillay (Photo: medianetset via Twitter)
The number of minor children crossing or attempting to cross the U.S. southern border unaccompanied by a parent or other adult relative has exploded from 6,560 in 2011 to an estimated 60,000 for fiscal year 2014. Border patrol agents in South Texas reported over 1,000 such children were apprehended by officials earlier this month, including a 3-year-old boy from Honduras.

What explains the dramatic increase?

As a government official from Ecuador told The New York Times, one of the main reasons is a belief held by many in Central America and Mexico that some sort of immigration reform will be passed that allows anyone who can get into the United States illegally to be able to stay.

In other words, the prospect of amnesty is encouraging more illegal immigration – and in this case, the human trafficking of children. Often raised by their grandparents or other relatives because their parents have already come to the U.S. illegally, these children are traveling alone or with human smugglers, called coyotes, who are paid to get them across the border.

And what happens once they’re here? According to the Department of Health and Human Services, by law, the U.S. government must assume custody of “unaccompanied alien children” apprehended by law enforcement who file claims to remain in the United States. The government then contracts with state-licensed facilities to care for the children until it can place them with sponsors.

According to a judge in Texas who has reviewed numerous such cases, the U.S. government is guilty of encouraging this illegal behavior.

He described one case where after taking a child into custody, Homeland Security agents learned that the mother, who herself was in the U.S. illegally, had “instigated this illegal conduct.” DHS delivered the child to the mother anyway, didn’t prosecute her, and didn’t even initiate deportation proceedings for her. As the judge said, “instead of enforcing the law of the United States, the Government took direct steps to help the individuals who violated it,” conduct for which any “private citizen would, and should, be prosecuted.”

By fostering an atmosphere whereby illegal aliens are encouraged to pay human smugglers for further services, the Government is not only allowing them to fund the illegal and evil activities of these cartels, but is also inspiring them to do so.

To get an idea of the danger these children face, one need only read the very sad story of Noemi Álvarez Quillay, a 12-year-old girl from Ecuador. She died in a holding facility in Mexico — authorities there say she committed suicide — after being caught with a smuggler trying to get her across the border near El Paso. Noemi was poor, but had been well taken care of by her grandparents in Ecuador after her parents moved illegally to the U.S.

As reported in The New York Times:

Both grandparents say they and Noemi were reluctant for her to leave. Ms. Guamán (the grandmother) said she argued with her daughter, the girl’s mother. “I said to her, ‘Why take her away? She’s studying here, she’s doing well.’ But my daughter says education in Ecuador is no good and it’s better for her to study there. And she took my Noemi away, only for this to happen.”

According to Homeland Security Secretary Jeh Johnson, the government has started a publicity campaign to dissuade minors from attempting to enter the U.S. this way. “We have to discourage parents from sending or sending for their children to cross the Southwest border because of the risks involved.”

But no publicity campaign can overcome real incentives. And the Obama administration has implemented multiple policies that encourage illegal immigration. Its lax and increasingly nonexistent enforcement of our immigration laws has resulted in a 40 percent drop in deportations of illegal immigrants in the U.S. since 2009. Instead, illegal immigrants who have been convicted of further crimes inside the U.S. have been released. Last year, one in three — more than 68,000 criminals – was released.

Interestingly, one of the reasons given for children attempting to cross the border into the U.S. is that they are trying to escape crime and gang violence in their home countries. Yet the Obama administration’s immigration policies are actually releasing criminals back into the very communities where these children are likely to find themselves in America.

This is Obama’s version of “humane” immigration policies.

Learn about a better way to reform immigration policy.