A chemically unbalanced psychopath goes on a murderous rampage, this time using his luxury sports car, some knives and a firearm to kill and maim innocent people.

And what is the reaction of ostensible "sportswriter" Mike Lupica? As you might have expected, it's to lash out at the Constitution's Second Amendment and those who defend it. 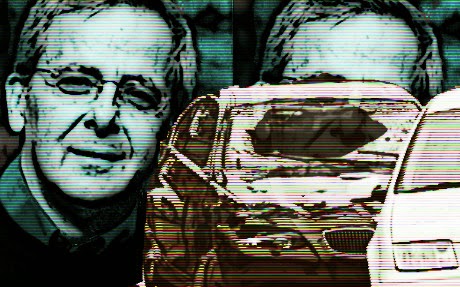 Masterminds like Lupica can't be bothered to ruminate on the fact that the psycopath's own parents couldn't keep their kid on his meds nor alert the authorities to their real fears. No, Lupica wants to punish all of society for the actions of a lunatic.

So Lupica goes right to the totalitarian's playbook: get rid of all guns in order to stop psychopaths from killing. Yes, that's right, Mikey, ignore the guy plowing into people with his car, ignore his use of knives to kill, and instead go right for the jugular of the Consitution.

Lupica parades out all of the leftist's favorite tropes while ignoring the inconvenient facts of murder and fatalities in America.

Once again, the only true gun control in America is when the shooter finally puts one of his guns to his own head and blows his own brains out.

Wayne LaPierre, the gun nut who runs the National Rifle Association and is so often the face and voice of that association, likes to say that the only thing that stops a bad guy with a gun is a good guy with a gun, as if the principal at Sandy Hook Elementary School, the late Dawn Hochsprung, could have saved herself and those children if she’d just been packing...

...Lanza slaughtered elementary school children in Newtown and not college kids the way Rodger did. Lanza’s psychotic break had occurred long before he walked through the doors of Sandy Hook with his Bushmaster rifle, another real good gun for real fast killing.

According to the FBI, more people are killed with fists and hammers each year than with long guns.

A day doesn't go by when I visit the firearm news portal BadBlue Guns that I don't see stories about concealed-carry permit holders saving the lives of innocents and even law enforcement officers.

Studies in Kansas and Texas have confirmed larger-scale research proving that the more law-abiding citizens with guns there are in an area, the safer it becomes.

Separately, tens of thousands of Americans have died due to Leftist policies such as "fuel efficiency standards" that make vehicles less safe in order to increase mileage. To paraphrase Deroy Murdock, most drivers would rather sacrifice a few MPG to gain a bunch of layers of protective steel. According to studies by the Brookings Institution, CAFE standards have killed as many as 125,000 people while crippling and seriously injuring up to 625,000 more. For a few miles-per-gallon in fuel.

Where's Lupica's outrage regarding the 750,000 dead and maimed due to his party's CAFE standards?

But back to the point: rather than examine the real issues, Lupica's fear of firearms and his hatred of the Constitution prevent him from carefully analyzing the situation to better understand the root causes.

What was the psychopath's background? According to The Chicago Tribune:

...Rodger, who was bullied as a child and was known to have Asperger's syndrome, talked ... about wanting to hold down and rape women. Within the last year, his mental health deteriorated and he was under psychiatric care but not taking his medication...

Oh, and there's another detail which London's Telegraph adds:

...he was obsessed with video games... [and t]roubling questions were raised last night about whether the US authorities missed crucial warning signs about Rodger’s mental health... A lawyer for Peter Rodger said that his son, who was diagnosed with Asperger’s syndrome as a child, had been receiving psychiatric treatment from several mental health professionals.

In short: possible Asperger's, bullied and rejected by his peers, a long history of mental health issues, and an obsession with violent video games.

Sounds alot like the Sandy Hook killer, who won't get his name in print from me.

So, in short, this lunatic sounds like a carbon copy of the Sandy Kook, with all of the troubling signs and history that could have been addressed with some kind of sensible mental health program.

Throughout the course of human history, before the invention of the firearm and after, a few homicidal maniacs have attempted to slaughter innocents. By and large, most people are good. Most people are law-abiding. Most owners of the roughly 800 million firearms in this country are a net benefit to society. The science, as the Left is fond of saying, is settled.

And further, Mr. Lupica, nothing short of a time machine is going to get rid of guns in this country. And I don't see a two-bit, leftist fantasist like you inventing a time machine anytime soon.

So stop attacking our founding documents and address the real issues behind this case: untreated mental illness.

Or try to repeal the Second Amendment if you think you command some vast army of supporters.

Otherwise, when it comes to the guns that are the backbone of American independence, I suggest you drink a nice tall glass of shut-up juice while reading the Constitution for the first time in your life.

Are they sure it was untreated? Because, often, the treatments don't seem to do a bit of good. And, considering how many mass murderers are taking medication. Just... not sure yet what really was going on, though I don't honestly care. Evil does what it does, I mean.

Then again, I think this guy was just a jerk who couldn't deal with the reality that women didn't fit his liberal ideals and follow his liberal notions as to access. I think people need to stop feeding people the line that because they choose to ignore reality, that they can do as they please, using a diagnosis as a pass.

Give everybody access to a firearm. Evil will not last. They will get a gun anyway, it's just that, for example, not all of his roommates would have died. Ten murderous crime scenes? Did no one else have a gun? Seriously? Bah! Yes, I know Cali is seriously anti-gun, but... nobody had a firearm? Or was it that they weren't willing to use it to save other people, as they probably would have been prosecuted, or sued in civil court... or both. There is that.

Doug- back in 2008 before the election I was a regular reader of Lupica's Sunday notes column. He wrote "anything Obama writes on the back of a cocktail napkin is better than the suffering caused by George Bush". I have not read him since, but would love to ask the little turd if he's seen past the mirage or is HE still suffering from the mental illness of liberalism.

@Doom - by "untreated", I mean that someone like this punk -- who confessed to having numerous murderous rape fantasies -- should have been institutionalized.

@Greg - I keep forgetting what a twit Lupica is. He lives in a life of luxury, protected by armed security, and imagines everyone else's lives are like his. He is the archetype of the progressive elitist drone, with far more money than sense.

directorblue said...
This comment has been removed by the author.
4:53 PM


Lupica is a idiot, he always has been. He is barely coherent when he is writing about Sports, let alone when he dips his toes into a political or social discussion. He has only gotten worse as time goes on.

Mike Lupica is still writing at the New York Daily News? Who knew?

I agree with everything the author (not Lupica) said except the mention of Lanza He never existed so I don't consider that to be a valid comparison. I understand people will get emotional about my comment but research the evidence or lack thereof and you might be inclined to agree. Please use the official report, including pictures, when anylizing the evidence.
I wholeheartedly agree with the statement on mental health the author makes. I work in S.F. and I see it all around me. There are so many street people that need help I couldn't count them all. The gov't is happy to throw our $ all over the world even at the expense the brave veterans they maimed and the mentally ill here at home. We all share some blame for allowing our gov't to evolve into the very thing we fought a revolution to get away from.
Forgive us founding fathers for taking liberty for granted...