Every time Paul opens his mouth these days, odds seem around fifty-fifty that he's gonna enunciate some kind of crackpot position. 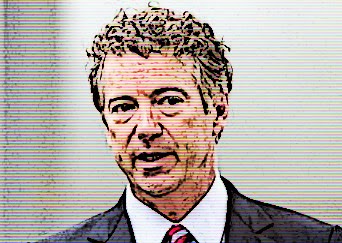 “Everybody’s gone completely crazy on this voter ID thing,” Paul told The New York Times in an interview on Friday. “I think it’s wrong for Republicans to go too crazy on this issue because it’s offending people.”

...He has even softened his stance on immigration, saying he favors legislation in which all the country's illegal immigrants can get work visas.

But just as Hispanics slammed Paul for being "offensive," even after he took a more liberal approach to immigration in favor of amnesty, black leaders gave him no credit for his softer stance on voter ID laws.

“Get real, Senator,” a black member of the Tennessee General Assembly told the Times. “To come here, to Memphis of all places, and espouse the principles and ‘goodness’ of today’s Republican Party, excuse me if I’m not buying it.”

Last year, Mark Levin described what the opposition to voter ID really is. 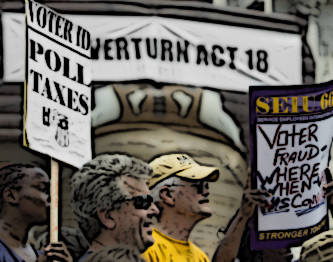 So my question is [this]: Is the government – are all state governments racist because they are requiring you to have a photo ID, that is a photo with your pigmentation on it? I mean, this is so asinine what the Left is up to in this administration.

Except vote! Anyone can vote without a photo ID at the polls!

Have you ever tried to check into a hotel without a government ID? Have you ever tried to rent a car without a government ID? Don’t we hold voting, like, at the top? Haven’t we fought the civil rights movement for people to have the right to vote? Why is it ipso facto discriminatory against minorities for people to show an ID? If you have a specific case in which a state, a town, a county or somebody has discriminated against you because of your race, you can bring a federal lawsuit under the Voting Rights Act, still today and a state lawsuit under state voting rights acts, still today!

Who uses it? The big cities use it, among others. When LBJ was running for president or first, for the Senate, it was rural areas that were using it.

So this isn’t some civil rights issue. This is to promote fraud.

Some of Paul's prior gaffes:

• Rand Paul: We "Probably Can't Get Rid of Obamacare"

I don't know how Republicans can safely nominate a man who has a tendency to pull a Biden on a fairly frequent basis.

His minds so open his brain has fallen out. That's the problems with the Libertarians.

"Let’s just be honest, they want to defend fraud." Defend, promote, facilitate... they're for it!

Paul has had some success lately in reaching across the aisle to liberals on issues like the NSA and government eavesdropping.
In his zeal to appeal to his newfound friends, he may believe he can compromise himself into the White House.

He is Ron Paul's son, and every week he seems to become more Libertarian than Republican. I wouldn't vote for him.

The more I see/hear of him, the more he reminds me of his lunatic Father...

Not sure. Never was sure about Paul, definitely not senior, less definite about junior. Whatever the case, I haven't established whether he was always in the bag (the wrong one), surrendered, or sold out. But recent tidings from him make me reluctant to include him in my political stable of reliables. Then again... Not sure there are any in there. None alive anyway.


This was always a matter of timing. Despite glimmers of hope, there was always the genetic connection that was bound to raise it's dopey head.

So I guess we can add another name to the DOA list of repubic's. Next!