OH, MY: Leading Democrats Now Leaking Reports That They Believe Obama is "Incompetent" and "Detached"

Didn't we tell these nitwits this, oh, six years ago (e.g., "Photos: The Illustrated Results of Obama's "Community Organizing"")? 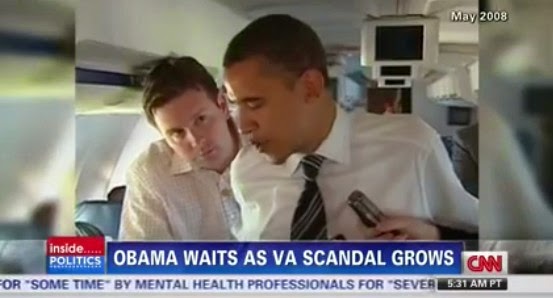 "Forget for a moment that Republican outrage," said King on his CNN show this morning. "More and more Democrats in key 2014 races are calling for the president to get a spine, they say, and fire his Veterans Affairs secretary. And what more and more Democrats are saying privately is scathing, calling the president and his team detached, flat footed, even incompetent.

"Maggie Haberman," said King turning to a panelist, "that's what strikes me, what democrats are saying privately in the wakes of the healthcare.gov problems, they see a president who doesn't want to take command, doesn't want to act fast. Raising the competence question. Some Democrats, who believe in government, [are saying] this White House doesn't appear to have its hand on the lever."

Haberman of Politico agreed, cited more examples, and added: "All of this adds up to somebody who just doesn't seem at all involved."

Or the constant fundraising?

Or the detailed focus on NCAA brackets and other sporting events versus, say, chemical weapons in Syria, nukes in Iran, and the annexation of Crimea?

It is the end of an era with the Halfrican and his menagerie in the People's House. It was good for him, he spent all our money, partied hearty, played basket ball and had some great golf lessons. Now the bills come due and he wanders off looking for another Village to organize.
Mooch will divorce him, his kids will live lives of privilege, and he will quietly die of AIDS in a closet somewhere while Carney swears he simply became a reclusive writer because we were racists. They'll print money with his face on it and we will endure the "child of hope" stamps as historians white wash the biggest fraud in the history of the world. The truth will come out in 60 years but nobody will care because hey, that was almost a hundred years ago. The worm turns.

"All of this adds up to somebody who just doesn't seem at all involved."

Indeed. Which leaves us with a single question to answer, and that one of interest mostly to historians:

Did Obama enter office already aware that he was incompetent and therefore resolved to distance himself from the duties of his positions, or did he learn it "on the job," such that his detachment became a response to the discovery?

Just FYI, by loading up all of the problems caused by our cancer of a government on Obama you're helping the collectivist project.

He's gone in a few short years, the rest of the crew will never leave. So if Hillary can say "Elect me because I'm SO much better than that bad old Obama!" she'll never have to explain how swapping out one figurehead of a massive, out of control government with another will make any difference whatsoever.

I can only imagine the soviets did the same thing every time they needed to swap out a Premier.

Another rant from another racist leeching of the story only written to appease the racists who has EVER liked Obama the moment they have heard of him because he chose to "step out of line" and be the first President to Not follow the rich, white, war-hungry, captailism, mantra like the men before him!

This question doesn't follow logically from my remarks. Really shoddy fallacy -- Obama's no saint, but what this thread is, is a typical example of how the right wing spends its days chasing after scurrilous falsehoods. Obama's no saint. But the right wing has abdicated its role as a serious component of the American dialogue.

What a disgraceful demagogic diatribe, from a right-wing wacko obviously afflicted with a severe case of Obama Derangement Syndrome.

he has faced constant, unrelenting, mean-spirited, dishonest criticism since before he took office and every day since. His patriotism has been questioned He has suffered innumerable lies about his ideology, religion, family and even his place of birth. No other president in the history of this country has faced such unfounded open hostility and disrespect. No other president has ever been called a liar by a member of congress during a State of the Union, no other president has had to show his birth certificate…repeatedly.

some people who accepted a dimwit who cheated his way into the presidency in 2000 and voted him in again are quite happy to criticize Obama for any reason they can …no … President Obama won handsomely … ! President Obama is not Anti-American … his only problem in the eyes of some is his name and his color … !

Obama is a good man. Republicans go nuts on him because his ethics is unmatched by anyone in their party. And he’s a black dude with a funny name.

A narcissist thinks that he is the most powerful man in the world.

Obama actually is the most powerful man in the world.

Is Obama a Narcissist?—Not anymore then other politicians. All politicians have to be somewhat of a narcissist because it is required for political skill to think yourself as the greatest. Imagine a politician with self-esteem issues and how unsuccessful they would be.

Is Obama a traitor to America?—No. You may not agree with his policies but that doesn’t make one a traitor.

Is Obama a usurper and what does that mean? No Obama is not an usurper. To be an usurper means one with an illegitimate or controversial claim to power. Obama was elected legally by the people.

There is a very, very, very long list of right-wing lies that too many people believe, either because they desperately want to believe or they’re just stupid.

what liberal lying obama dumbasses.. putin tells obama to shove obama's phone and pen up obama's rear end ..the world laughs at obama for not having any cojones ...obama's red lines shows the world he can't back up his threats
liberals believing the crap of the lying obama media . time for obama to help the USA and resign !!!!!!!!!!!!!!!!!!!!!!