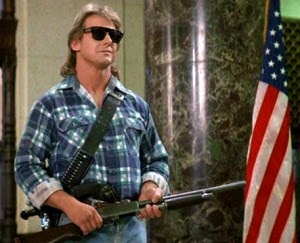 Climate blogger Tom Nelson alerted us to a study of Australian opinion about man’s role in making the planet boil (or not).

People are more likely to believe that humans cause global warming if they are told that 97 percent of publishing climate scientists agree that it does, a new study has found.

Well, yes. If I was told that, say, 97 percent of dentists agree that chewing Trident is better for your teeth than chewing bubble gum, that would make perfect sense. Trouble is, the idea that “97 percent of publishing climate scientists agree” human activity has created an out-of-control global warming crisis is a myth.

To cop the immortal words of Rowdy Roddy Piper in the B-movie classic “They Live”: I have come here to chew bubble gum and debunk this myth … and I’m all out of bubble gum.

One of the most commonly cited studies of the “97 percent” was conducted by a University of Illinois professor and a graduate student who asked the following questions to 10,257 Earth scientists working for universities and government research agencies:

Q1. When compared with pre‐1800s levels, do you think that mean global temperatures have generally risen, fallen, or remained relatively constant?”

Q2. Do you think human activity is a significant contributing factor in changing mean global temperatures?

They received responses from 3,146 people, of which only 5 percent self‐identified as climate scientists. To get to the magic 97 percent in the affirmative to both questions — in the answers to questions even many skeptics would answer “yes” — the study’s authors had to whittle down the survey to a paltry 79 “climate scientists,” defined as those who also have “published more than 50 percent of their recent peer‐reviewed papers on the subject of climate change.” The National Academy of Sciences survey is similarly skewed.

So, bottom line: A handful of “qualified” scientists asserting “fact” is not what it seems. Yet the enviro-left still clings to this fraudulent “argument by authority” nonsense.

Now that we’ve established the fraud of the “97 percent,” let’s move on the the Australian coverage — which features a new study entirely based on the fraud. Read it all yourself, but I love this quote best:

Wait a minute? I thought the votes of 79 carefully screened climate scientists was supposed to be determinative? I guess that’s the case … except when it’s not. I’m confused. Doesn’t science work, not by vote, but by the examination of facts to test hypotheses? I think they teach that in middle school. By this “voting” standard, “American Idol” is science!

And let’s not even get into the meat of this Australian survey — which is of 200 “pedestrians” in Perth. Quite the sample. I really hope it’s not just people pulled off the street in front of local pubs.

So, the take away from this ridiculous study and article is this: If you push the lie that “97% of publishing climate scientists agree that global warming is a direct consequence of the burning of fossil fuels by humans” to random passersby in Perth … they will tend to believe your lie, your argument to “authority.”

In other words, bad science plus bad polling gets the results the warmists want. What a surprise! A good gig, if you can swing it.

Just take ANY cloudless photo of Antarctica, & turn it into a color negative. The surrounding snow/ice
"will turn greenish-brown".

I ALWAYS Thought that the global warming folks were full of it, until I tried this one weird trick!

I am not a scientist nor am I a photographer, but turning an antarctic photo into a color negative would appear to be difficult to begin with - and would absolutely prove nothing about global warming if I could make the negative.

So someone is pulling my chain.

global warming hoax just another attempt to tax the AmERICAN working man and give the money to liberal causes.......
just look at Al gore... flies around in his personal jet , spends thousands of dollars on his mansion electric bill.... predicted in 2002 that the Artic would melt by 2012