RUBES: Crain's Chicago Business Dumbfounded as to Why the Illinois Economy is in the Crapper

Nearly five years after the recession ended nationwide, the Illinois unemployment rate is 8.4 percent, third worst in the nation. When Gov. Pat Quinn took office in January 2009, the recession had been underway for a year and unemployment stood at 8.0 percent, just slightly above the national average.

Since then, the Illinois economy has sputtered, with unemployment peaking at 11.4 percent before slowly dropping. The rate is now almost 2 percentage points above the national average. 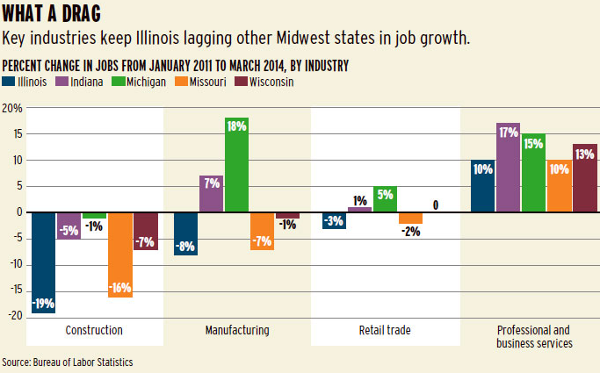 The nagging question—and one that might determine the outcome of this year's governor's race—is why?

But maybe said employment troubles are limited to only an industry or two, thanks to the Democrat Party's keen grasp of economics.

Illinois' stubbornly high unemployment is the result of several factors, including the severity of the state's housing slump, which has badly hurt the construction industry. The decades-long decline in manufacturing has continued, while neighboring states like Indiana and Michigan have a larger share of the rapidly improving auto industry, the only part of the sector that is rebounding. Meanwhile, jobs in retailing and financial activities in Illinois also continued to decline here while the rest of the nation recovered.

But perhaps all of those Democrat tax hikes are helping to spur hiring and opportunity.

The state's troubled fiscal condition and the “temporary” tax hike it spawned have not encouraged employers to put out the “Now Hiring” sign, either.

Income taxes went up in January 2011, precisely when Illinois started to diverge from most other states that saw steady improvement in their unemployment rates.

Well, maybe it was just a coincidence that the massive tax hikes and spike in unemployment occurred simultaneously?

“We started to see that correlation way back then,” says Ted Dabrowski, vice president of policy at the Illinois Policy Institute... “There wasn't any way to prove causation six months in, but it's persisted, it doesn't go away, we continue to have that two-point gap,” he says. “We think the tax hike is a huge factor.”

Well, I'm sure Governor Quinn and the rest of the Democrats in power are leading the charge to reinvigorate the Illinois economy through proven means!

So politically sensitive is the unemployment issue that the Quinn administration last year asked the federal Bureau of Labor Statistics, which compiles unemployment statistics, to recheck its calculations, arguing that a government survey of firms' payrolls showed more jobs than a separate survey of households on which the unemployment rate is based. “It is difficult to believe that employment would be collapsing in tandem with the labor force when payroll employment shows the opposite,” the letter said.

Well, I'd be willing to bet that most Illinois employers are fully committed to the state despite higher taxes, more regulation, and unpredictable health care costs.

It's difficult to separate the tax hike from other shocks that Illinois employers felt over the past three years, including the state's backlog of unpaid bills and the onset of Obamacare. Talk of the state's pension problems heated up in 2011, raising the possibility of even higher taxes.

“Everybody was on that bandwagon: how can I hire” when taxes are going up, says Alyce Andres-Frantz, who talks to scores of local executives each month as lead author of the Chicago Business Barometer, an index of business activity published by Market News International.

Let's put it this way: I could've reduced the entire article to be less than 50 words. Something along the lines of:

"Illinois' persistent economic woes can be traced directly back to policy failures, corruption and public sector unions, all of which can be tied directly to the Democrat Party. Firing Democrats, aggressively prosecuting corrupt officials, and moving Illinois to a right-to-work state, would all allow the state to make major strides in combating high unemployment."

at 11:28 AM
Email ThisBlogThis!Share to TwitterShare to FacebookShare to Pinterest
Labels: Crime, Democrats, Economy, Obama

Illinois residents outside Chicago and Springfield are surprisingly conservative. They've been steamrollered by Dems and the Chicago machine for years. They're the ones I feel sorry for. They did not ask for this.