A LOGICAL SUCCESSOR TO THE HONDA S2000? Honda S660 Making Waves in Japan

It's been half a decade since the Honda S2000 last made landfall in the U.S. as a production vehicle. The two-seat, rear-wheel drive roadster had a 10-year run featuring a high-revving four-banger and designed as a true sports car. It was the logical next evolutionary step in the genre that included the 1990 Mazda Miata.

According to Australia's Car Advice, however, its successor may soon be on the way. 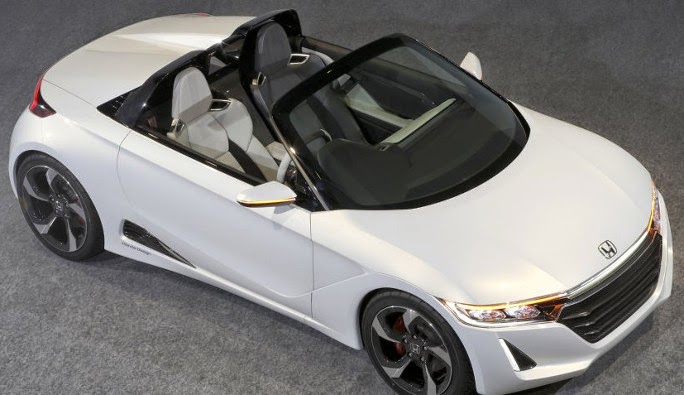 Honda will begin producing a small two-seat roadster based on the S660 concept car sometime during 2015.

The report on Japanese website Response doesn’t confirm the production car’s specifications, but it’s widely expected to carry over many of styling elements first seen in the S660 concept car (pictured) that debuted at the 2013 Tokyo motor show...

...It’s not yet clear whether the S660 will be sold outside of Japan, but if it does make it beyond the mother country the car is expected to be fitted with larger and more powerful 1.0-litre turbo engine. Regardless, 2015 looks set to be a big year for Honda as it injects a bit more verve into its portfolio. Other sports cars it has lined up for next year include the turbocharged Civic Type R, which we’ve driven in prototype form, and the long awaited follow up to the NSX that will feature a hybrid drivetrain and be produced in the USA.

I don't know why I love two-seat convertibles, but I always have and I always will.

at 6:48 PM
Email ThisBlogThis!Share to TwitterShare to FacebookShare to Pinterest
Labels: Autos